All for Love (album)

All for Love (album) 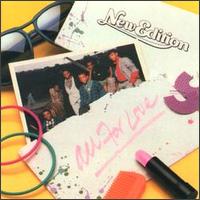 
"All for Love" is third studio album by Grammy-nominated /pop from on , . The album peaked at #14 on the , selling an estimated 45,000&ndash;56,000 in its first-third weeks. On the Billboard / Albums chart, it peaked at #2. This is group member's last album until the group's revue in 1996, with their comeback album, "". Throughout the 1985&ndash;1986 era, Brown and the group was going through withdraw and conflicts, and left in the of 1986, to pursue his solo career that lasts a decade (and a half), vocal-tenor was voted into the group in 1987 after his successful hit with back in 1984. The album was nominated for 2 : Best R&B Album, and .

By spring 1985, New Edition were one of the biggest pop acts in the world after the success of their second self-titled album, which was released in 1984. By this point, the group—whose members' ages were all around 16, 17 years of age—were going through a transition period, going from teen bubblegum pop to more adult R&B. While most of the members were comfortable with the group's direction, Bobby Brown argued that the songs they were recording were too sappy, and he wanted to stop singing bubblegum pop. Also, Brown was angry that he did not have more than two songs where he was singing lead while (and occasionally ) sang most of the lead vocals. During their second national tour, tensions had grown between the members of the group with some upset that Tresvant was attracting most of the screams from female audience members and, according to Tresvant in trashed their performance on that basis of Tresvant getting the most attention. Brown, in particular, feuded with Tresvant and cut in on Tresvant's leads, often performing more raunchily onstage compared to his bandmates, angering the group's management. By the time of production of this album, the tension between Brown and his bandmates, especially Tresvant, had reached a standstill and while he is featured on all the songs on this album, this would be the final non-Christmas studio album that he was featured on as member of New Edition. Vincent Brantley originally wanted the lead single to feature Brown but MCA balked at this idea and said stick to what works and work with Ralph.

While not as hugely successful with its singles as "New Edition", "All for Love" still was able to go double platinum based on the success of the hits "Count Me Out", "With You All the Way" and the sole top 40 pop hit, "A Little Bit of Love (Is All It Takes)", which peaked at number thirty-eight on the pop chart. All three songs reached the top ten of the R&B charts however. With the success of two albums, New Edition continue to reign as the top teen group in the country. Notably, Brown began distancing himself from the band and was not featured on the group's videos for this album. "Count Me Out" in particular only featured Tresvant, Bell, and .