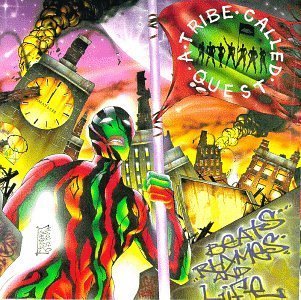 "Beats, Rhymes and Life" is the fourth album of hip hop group . Released in 1996, it followed three years after the highly regarded and successful "". This album is a departure from the joyful, positive vibe of the earlier albums and is regarded as the groups darkest album in content

The album was also the first to feature production work from , which was composed of Q-Tip, and . One topic on this album was the Death Row vs. Bad Boy rivalry. This album also features Consequence frequently on the album, which made many fans think he was a new member.

The video version for has rapping the 2nd verse instead of Consequence. However, Phife's verses does not appear on the album.

In the song "Keep It Moving", Q-Tip responds the diss comments made about him from Westside Connection's song "Cross Em Out And Put A K", by saying that comments made about the West from some time before the album were not inteded to diss the west coast and that people should not misinterpret his lyrics.

Quote_box|width=40%|align=center |quote="Somethin for your earhole,
so you can clean them shits out
It seems that some don't understand what I'm talkin about
How you get West coast nigga, from West coast hater?
I could never dis a whole coast, my time is too greater(true)
Yeah, we from the East, the land of originators
You also from the West, the land of innovators
The only difference of the two is the style of the rap
Plus the musical track, this beef shit is so wack
Let me let y'all brothas know I ain't no West coast disser
Another thing I'm not is a damn ass kisser
So listen to my words as I set things straight
I ain't got no beef, so don't come in my face
Yo, keep it movin"
|source=Q-Tip "Keep It Movin"