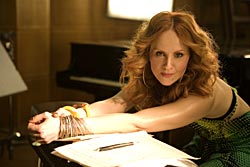 Aleksandra Kovač (Serbian : Александра Ковач; born 1972 in , , ) is a singer, songwriter, arranger and producer from . She is the daughter of a prominent Serbian composer .

Surrounded with music throughout her childhood, Aleksandra Kovač began to play the piano at the age of 15, while already writing her own material since the age of 13.

Aleksandra's early musical activity was a joint effort with her younger sister - their first recordings were done in in the studio owned by their uncle.

In 1989 under their father's guidance, using the name Next of Kin, the girls recorded an English language album "Way to the Top" in . The album was also released in their home country in 1990, but failed to make much of a splash without proper media support.

In 1991, the duo sang backing vocals for who represented Yugoslavia at the 1991 Eurovision Song Contest.

In the spring of 1991 they signed their first contract with a -based management company, Mismanagement (whose clients also included , and ). They moved to London in September 1991 to support on tour.

Towards the end of the year, they came back to Belgrade before departing for Norway in the summer of 1992 where under the name You Dirty Sisters they recorded a promo material for composer Sway.

Year 1993 brought another trip to where the sisters performed in various London clubs such as , "The Orange" and "Tea Room des Artistes". After hearing them perform in Mean Fiddler in 1993, (former singer of ) booked Aleksandra and Kristina as an opening act and also as backing vocals on his tour. For this occasion they performed as The Cornelias. After the tour, Aleksandra began a collaboration with "New Underground", a team of young producers from Manchester, which resulted in several songs that are a mix of pop and R&B. With this, K2 got positive reactions from major records labels-Sony 2, Polydor and Warner Bros.

In the next five years, Aleksandra and Kristina worked with many important names from the music industry, such as Derek Bramble (composer and producer, worked with Whitney Houston, Nona Gaye) and the composing duo - (composed and produced for Genesis, ).

In 1995, the girls returned to their hometown of Belgrade where under the name K2 they wrote, arranged, produced and performed their first self-titled album which become #1 in all the charts. They successfully promoted the album throughout the country, and in 1996 they release their second album, "Malo soula". At this time, these two albums, as well as the videos for the singles, represent something new, original and fresh in Yugoslavia.

A year later, Aleksandra and Kristina went back to , and signed a contract with EMI to release an album for the Spanish market. After successful promotion of the album and a tour, the group returned to and stopped working.

Aleksandra's first solo forays came between tours and gigs with her sister. In 1993 she performed in Spain with dance group , playing the keyboards and singing back vocals. She also backed singer Mickael Herzog on his Spanish your.

Soon after K2 stopped performing in late 1990s, Aleksandra decided to continue solo, but now not only as a performer and composer, but as an arranger and producer as well.

She met a talented and perspective young producer and musician, (of the group ), and with him forms the production team "RAProduction", that has been successfully creating music for the past 9 years.

Aleksandra and Roman also produce the songs and albums for the majority of these performers.

In 2001 they begin work on the EP "You and Me", which they single-handedly produce and publish. The EP contains four of Aleksandra's soulful, R&B compositions they convey her experiences in love and life through a mix of funk, soul and two-step. In the same year, Aleksandra and Roman are invited by some of the top world managers to come and present their music and work.

They go to and begin a collaboration with John Mason, the leading entertainment lawyer in the US.

Aleksandra has signed publishing contracts with companies such as Air Chrysalis, EMI Spain, Croatia records, Menart and she is a member of HDS and HUZIP in Croatia and STIM in Sweden.

She composes music for many theatre plays, as well as the score for the RTS' TV series "Lisice", numerous commercials (Telekom, Grete, Banini) and TV shows.

In 2006 she released her first solo album, "Med i mleko" ("Honey and milk"), and with it, again proved herself as a talented singer and songwriter. Her album was one of the best selling albums in 2006. Her idol is .

In 2006, Aleksandra appeared in RTS TV show "TV lica: Kao sav normalan svet", a show that allows to the viewers, to look inside in a normal day of a popular Serbian TV star, and gave the opportunity to her fans to see how is living their star. In that occasion, Aleksandra showed her dogs, and where she likes to go during the day.

On April 26, 2007 Aleksandra held her first concert in Expo sala in Belgrade. The concert was organised by Serbia's freshly launched .

In February of 2008 Aleksandra went to Slovenia to collaborate with a band named Leeloojamais. Together they recorded a bilingual song (in Slovenian and Serbian) titled "Mi" ("We"). Aleksandra has described the collaboration as a "great honor to be on RTV Slovenia participating in the Eurovision Song Contest, and in fact this song received the best response from the audience." The song was written by a Croatian author and it was translated to Slovenian and Serbian by the band and Aleksandra. The song is a single on the Leeloojamais album "Country Club Music".

Aleksandra Kovač won the "Best Adriatic Act" award at in .