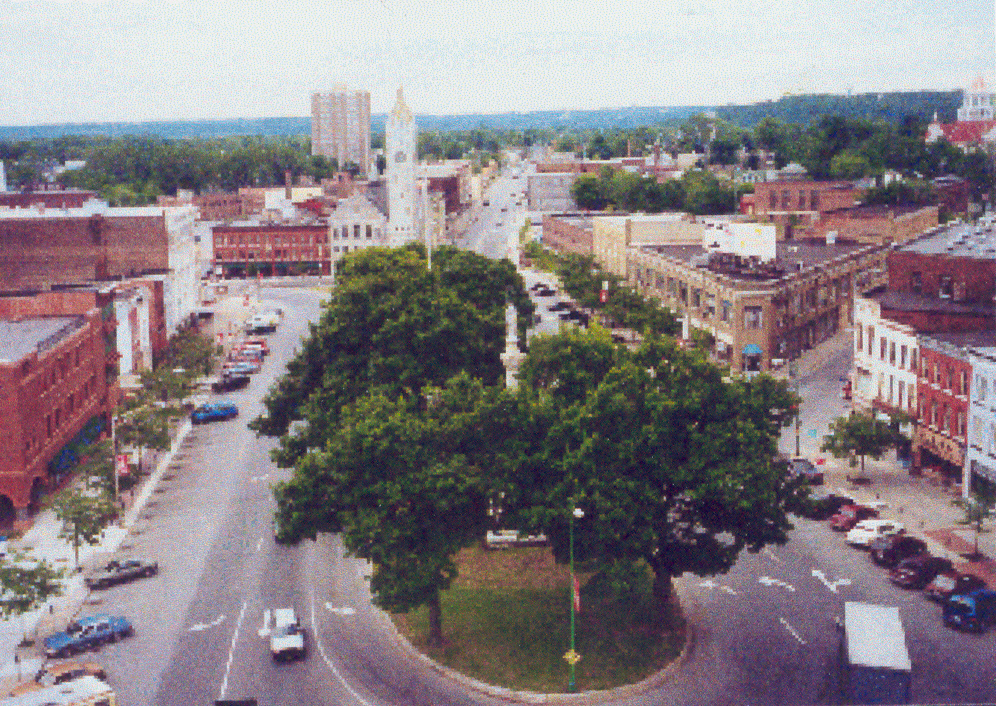 Public Square is an open mall that lies in the center of . The square is listed as Public Square Historic District on the .

The square is rectangular in shape. Buildings line all four sides of the square, while a large oval park sits in its center. A one-way traffic pattern circles the park. Seven of Watertown's main streets (including U.S. Route 11, , , and ) intersect at the square, making it a heavy traffic destination for motorists.

While the square boasts some modern architecture, its main character is defined by the numerous 19th century buildings that still stand. In all of its buildings, the square is host to a multitude of shops, restaurants, business offices, churches and apartment houses, making it a major shopping and business destination in the city.

Watertown's first settlers built their homesteads on what is now the square's West End in 1800. In 1805, several settlers donated land for public use which became the basis of the square. This helped to develop the square as Watertown's main business district. The current layout of the square and its surrounding streets developed in those early years. [cite web|url=http://www.watertown-ny.gov/index.asp?nid=411|title=Watertown, NY Official Site Our History|accessdate=2008-07-04|work=City of Watertown History|publisher=City of Watertown, NY] In 1849, most of Public Square and buildings on three adjacent streets were destroyed by fire. [cite web|url=http://freepages.genealogy.rootsweb.ancestry.com/~twigs2000/water732.html|title=Hamilton Child's Jefferson County Gazetteer 1890|accessdate=2008-07-04|work=Child's Gazetteer|publisher=Rootsweb] The square was immediately rebuilt. Several buildings erected during the rebuilding still stand. In the rebuilding of the 1850s, the city created three parks at the square's center, with a fountain inside the center park. During Watertown's industrial boom in the late 19th and early 20th centuries, Public Square became the heart of Watertown's retail, business and social life. In the 1950s, the three parks in the square's center were combined into one large park.

The square's retail and business dominance started declining in the latter half of the 20th century. Urban renewal policies during the 1960s and 1970's resulted in the demolition of some of the square's historic structures. Declining industry hurt Watertown's once prospering economy. Although nearby expanded in the 1980s and brought growth to the Watertown, modern shopping malls and retail chains built on the city's west side drew business away from the square. Public Square's days as the city's main retail destination were at an end. The square continued its slow decline over the next 20 years. [cite web|url=http://jeffco.wikispaces.com/Public+Square+History+1950-2000|title=Public Square History 1950-2000|accessdate=2008-07-04|work=Jefferson County Wiki|publisher=Wikispaces]

The beginning of the 21st century saw a reversal in attitudes towards Public Square. With a resurgence of pride in the square and its role in Watertown's history, civic and business leaders have taken a strong role in its redevelopment. Existing buildings were refurbished and new businesses moved in. Some decaying structures beyond repair were demolished. In 2006, the new economic development was coupled with a multi-million dollar streetscape project to reinforce the square's infrastructure, as well as beautify its roads, walkways and landscaping. This project is scheduled for completion in 2008. [cite web|url=http://www.watertown-ny.gov/index.asp?NID=275|title=Watertown, NY Official Site Streetscape Project|accessdate=2008-07-04|work=Downtown Watertown|publisher=City of Watertown, NY]

Public Square has been the site of many notable people, buildings and inventions.

*Public Square is home to the . Built in 1850, the Arcade boasts to be the oldest continuously operating covered mall in the United States. It is a National Historic Landmark. [cite web|url=http://jeffco.wikispaces.com/Paddock+Arcade|title=Paddock Arcade|accessdate=2008-07-04|work=Jefferson County Wiki|publisher=Wikispaces]

*Abolitionist spoke at Washington Hall and was a guest at the square's renowned Woodruff Hotel in the 1850s. He is noted for insisting on using the front entrance and eating in the hotel's public dining room. Worried about local prejudices, the hotel managers had wanted him to use a rear entrance and stay away from the public areas. [cite web|url=http://marcmny.tripod.com/jeffco3.htm|title=History of the Jefferson County Region Page 3|accessdate=2008-07-04|work=Jefferson County History|publisher=MarcMNY]

* worked as a clerk in Smith and Moore's Department store in the 1870s. He had the idea to set up a table of discount merchandise and fix the price of the items at five and ten cents apiece. So successful were the sales that he was inspired to start his own store based on the same idea. He opened his first store in Utica, NY, starting the "Woolworths" chain of department stores. [cite web|url=http://www.watertown-ny.gov/index.asp?NID=413|title=Watertown, NY Official Site F. W. Woolworth|accessdate=2008-07-04|work=F. W. Woolworth|publisher=City of Watertown, NY]

* invented the car freshener in the Electric Building on Public Square in the 1950s. These car air fresheners are world famous. Car Freshener Corporation maintains its corporate headquarters in Watertown. It has factories in Watertown and several other cities around the United States. [cite web|url=http://marcmny.tripod.com/jeffco3.htm|title=History of the Jefferson County Region Page 5|accessdate=2008-07-04|work=Jefferson County History|publisher=MarcMNY]