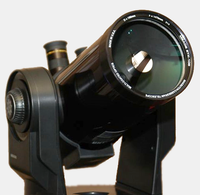 The ETX (Everybody's Telescope) is a line of telescopes made by Meade Instruments.

The ETX started out as a line of Maksutov-Cassegrain telescopes by Meade. Meade's original 90 mm (3-1/2") Maksutov Cassegrain telescope (first produced in 1996) took advantage of high volume mass production and simplified optical and parts construction to open a new market for a cheap alternative to the very expensive Questar 3-1/2 Maksutov Cassegrain[1][2] The ETX "line" has been expanded to 105 mm, and 125 mm Maksutov Cassegrains and achromatic refracting telescopes in sizes of 60 mm and 70 mm, but these two models were later replaced by a 80 mm model. The line has come to take advantage of "goto" telescope mount technology, making it very popular with amateur astronomers.[3]

The original 1996 model, now referred to as the "RA" or "classic" model, had a clockwork mechanism to track movement of the earth with an equatorial wedge, but it cannot be retrofitted for computer control.

In January of 1999, Meade introduced the ETX-EC which included electronic control of both axis through a small hand-controller. An optional #497 Autostar package was offered and would replace the simple electric controls, turning the ETX-EC into a fully computerized "goto" telescope.

Not officially a new model but rather a package (which eventually became standard), the "AT" package included an ETX-EC telescope bundled with the #497 Autostar controller and a stronger "deluxe" tripod.

Meade's UHTC (Ultra High Transmission Coating) treatment was first offered as an option on "EC" model telescopes (part of the "AT" bundle) in 2002. This coating improves light transmission by about 15%.

In October 2004, Meade announced the new ETX-PE or Premier Edition. The small right-angle finder scope was replaced on these models by an electronic module which included a level sensor, a magnetic north sensor, a real-time clock and a red-dot viewfinder. Also bundled was the PC interface cable. UHTC was still offered as an option. Early Premier Edition telescope had an image of the North American (ETX125) or Orion (ETX90) Nebulae printed on the optical tube.

Further revisions of the ETX-PE used a newer model Level-North module and Autostar controller (#497eq), made the UHTC coatings standard and went back to blue optical tubes.

Retail price of the ETX telescope has been constantly going down since its original 1996 introduction while capabilities and included accessories have increased dramatically. 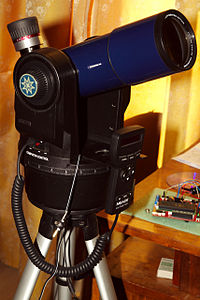 In 2000, Meade added small 60mm and 70mm achromatic refractors to its ETX line. They were mounted on a dual fork mount similar to the larger models and included computer controls in the form of the #494 autostar.

At the time of introduction, they were some of the least expensive "goto" telescopes on the market.

Both models were replaced later by a single 80mm F/5 model.

In 2009, Meade introduced the ETX-LS, a 150mm (6in) F/10 Schmidt-Cassegrain or ACF telescope on a very different single-fork arm. The LS include the Autostar III controller with over 100,000 objects in its database. It has a built-in CCD imager (E.C.L.P.S.) and a mini SD card reader for astrophotography. It includes audio and video descriptions of several hundred targets