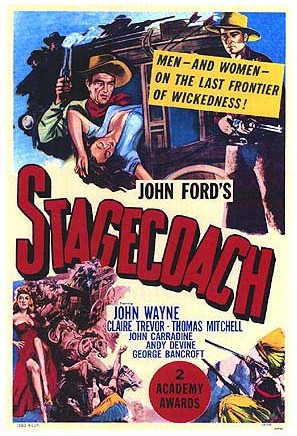 "Stagecoach" is a fy|1939 directed by , starring and in his breakthrough role. The screenplay, written by and , is an adaptation of "The Stage to Lordsburg", a 1937 short story by . The film follows a group of strangers riding on a through dangerous Apache territory.

Although Ford had made many silent films in the Western genre prior to "Stagecoach", this was his first with sound. It was also the first of many films which Ford made on location in , in the American southwest on the - border, many of which also starred John Wayne.

In in 1880, a motley group of strangers boards the east-bound to Lordsburg, . Among them is Dallas (Claire Trevor), a who is being driven out of town by the members of the "Law and Order League"; an alcoholic doctor, Doc Boone (Thomas Mitchell); Lucy Mallory (Louise Platt), who is traveling to see her cavalry officer husband; and whiskey salesman Samuel Peacock (Donald Meek).

When the stage driver, Buck (Andy Devine), looks for his normal shotgun guard, he is told by Marshal Curly Wilcox (George Bancroft) that he has gone out to look for a fugitive, the Ringo Kid (John Wayne). Buck tells Marshal Wilcox that Luke Plummer (Tom Tyler) is in Lordsburg. Knowing that the Kid has vowed to avenge the deaths of his father and brother at Plummer's hands, the marshal decides to ride along.

As they start to pull out, U.S. cavalry Lieutenant Blanchard (Tim Holt) informs them that and his s are on the warpath, and that they will have no escort until they get to Dry Fork. Gambler and Southern gentleman Hatfield (John Carradine) joins them to provide protection for Mrs. Mallory. At the edge of town, the stage is flagged down by pompous banker Henry Gatewood, (Berton Churchill), who is sneaking away with $50,000 embezzled from his bank.

Along the way, they come across the Ringo Kid, whose horse had become lame and left him afoot. Even though they are friends, Curly has no choice but to take Ringo into custody. As the trip progresses, Ringo takes a strong liking to Dallas.

When they reach Dry Fork, they are informed that the expected cavalry detachment has moved on to Apache Wells. The passengers vote on whether to press on or turn back. With only Peacock objecting, they go on and reach Apache Wells. There, Mrs. Mallory faints when she hears that her husband had been wounded in battle. She begins to go into labor. Doc Boone is called upon to help her through her childbirth. Eventually, Dallas emerges with a healthy baby. Later that night, Ringo asks Dallas to marry him. She does not give him an immediate answer, afraid to reveal her checkered past, but the next morning, she agrees to marry him if he promises to give up his plan to take on the Plummers. Encouraged by Dallas, Ringo makes a break for it, but turns back when he sees signs of Indians.

When they reach Lee's Ferry, they find the station and the ferry burned down and the people either dead or having fled. They tie large logs to each side of the stagecoach and float it across the river. Just when they think that they are in the clear, the stagecoach is chased by the Apaches. Curly releases the Kid from his handcuffs to help fight them off. During a long chase, when things look bleak, Hatfield is about to kill Mrs. Mallory with his last bullet to save her from being taken alive when he is fatally wounded. Just then, the U.S. cavalry charges to the rescue.

When the passengers finally arrive in Lordsburg, Gatewood is arrested by the local sheriff, and Lucy is told that her husband's wound is not serious. Dallas begs Ringo not to go up against the Plummers, but he is determined to settle matters. In the ensuing shootout, the Kid dispatches Luke and his two brothers. He returns to Wilcox, expecting to go back to jail. He asks the lawman to take Dallas to his ranch. However, when Ringo gets on a wagon to say goodbye to her, Curly and Doc laugh and start the horses moving, letting him "escape".

The screenplay is an adaptation by Dudley Nichols of "The Stage to Lordsburg", a short story by . The rights to "Lordsburg" were bought by John Ford soon after it was published in "Colliers Illustrated" on .

Ford's claim also seems to be the basis for claiming that Haycox himself relied upon Guy de Maupassant's story. However, there appears to be no concrete evidence for Haycox actually being familiar with the earlier story, especially as he was documented as going out of his way to avoid reading the work of others that might unconsciously influence his writing, and he focused his personal reading in the area of history.

"Stagecoach" has been lauded as one of the most influential films ever made. Edward Buscombe writes that the introduction of Wayne's character Ringo is "one of the most stunning entrances in all of cinema...The camera dollies quickly in towards a tight close-up...So fast is the dolly in that the operator can't quite hold the focus." [ Edward Buscombe, "Stagecoach", British Film Institute, 1992, p.9.] argued that it was a perfect textbook of film making and claimed to have watched it more than 40 times during the making of "". [Welles, Orson and Bogdanovich, Peter, "This is Orson Welles", Da Capo Press, 1998, pp. 28-29. "After dinner every night for about a month, I'd run "Stagecoach".... It was like going to school."]

* In 1995, this film was deemed "culturally, historically, or aesthetically significant" by the United States and selected for preservation in their .

The film was originally released through United Artists, but under their old seven-year-rights rule, surrendered its distribution rights to producer Walter Wanger in 1946. Many independent companies were responsible for this film in the years since. The film's copyright is currently held by , who produced a later 1966 remake of "Stagecoach". However, distribution rights are now held by the on behalf of ancillary rights holder The , with and Warner Bros. Pictures representing. UCLA formally restored the film in 1996 from surviving elements and premiered on cable's network. The current DVD releases by do not contain the restored print, but rather a video print held in the Castle Hill/Caidin Trust library.