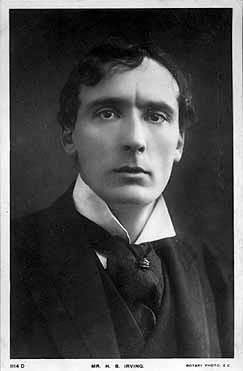 Although, as a child, he appeared a couple of times in his father's productions, it was intended that he would become a lawyer. He went to where he studied law and appeared in some student productions. Afterwards, in 1894, as was called to the Bar at the "Inner Temple", but instead of pursuing a career as a barrister he decided to become an actor, taking the stage name H. B. Irving to distinguish himself from his father, whose birth-name he shared.

His first appearance on the stage, at age of twenty-one, was at the ",", in "School". In 1906 he toured with success throughout the , appearing in plays made memorable by his father, "The Lyons Mail," "Charles I," and "The Bells." In 1905 he gave a lecture, largely autobiographical, to the "Academy of Dramatic Art" in London. Inevitably, his early years as an actor were spent in the shadow of his father, especially as, at first, he was a member of "Sir Henry Irving's company".

In 1896, he married , who, after playing the part of "Trilby" the year before, was, at that time, the best known actress in Britain. HB & Dorothea had a son Laurence(1897-1988) who became a well known Hollywood art director and a daughter Elizabeth(b. 1904). HB continued to be part of his father's company, but soon felt the need to branch out. In 1898, he joined "George Alexander" at the where he is played "Don Juan" in "Much Ado About Nothing", and appeared in the surprising hit, "The Ambassador", a play written by .

For the following seven years, the couple, selecting the parts that appealed to them, moved between companies, sometimes together and sometimes separately. In 1900, they both appeared in 's production of "A Midsummer Night's Dream" that ran for 153 performances at .

In 1904, only a year before his father's sudden death on , , Irving played "Hamlet" for the first time. The production, which was a popular success, was presented at the , with as "Claudius", as "Laertes" and as "Ophelia".

After his father's death, he established his own company, that included his wife, and toured most provincial cities, playing mainly repeats of Sir Henry Irving's best remembered performances. For the opening night of the new in he presented "Charles I", "The Bells" and "The Lyons Mail". Occasionally, other plays were presented including, most successfully, "Dr Jekyll and Mr Hyde" at the , .

In 1911, Irving, Baird and their London Company toured , again presenting "Hamlet". Two years later, Baird retired from the stage, while Irving kept on performing. In 1913 he visited South Africa, and a photograph records his dinner with the Owl Club in Cape Town. In 1914, he appeared with in "The Sin of David" at the .

During , Irving withdrew from the theatre and returned to the law, writing the study for which he is now most famous, "", which examined the lives, motivations and crimes of some infamous murderers, "Life of Judge Jeffreys", "French Criminals of the 19th Century" and other papers on the subject. After spending twenty years of his life dedicated to the theatre, his greatest success came from being what it was intended he should be, a legal expert.

H.B.Irving was also a founding member of with Arthur Conan Doyle, Arthur Diosy,J.B. Atlay, and the Coroner Ingleby Oddie (among others). Our Society is the still flourishing "Murder" Club in London, where old crimes are discussed at regularly held dinners.