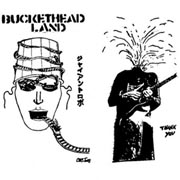 
"Bucketheadland Blueprints" is the demo version of Buckethead's first album .

Even though the demo tape is one track, fans have split it into 23 unofficially named "parts". The re-release version contains 57 tracks.