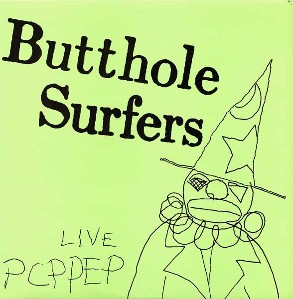 "Live PCPPEP" is a live , and first official live album, by American punk band , released in September 1984. All songs were written by the Butthole Surfers, and recorded live at The Meridian in , on March 25, 1984.

This was the Surfers' final album on . "Live PCPPEP" and 1983's "Butthole Surfers" were reissued as the "" on in 2003. The Latino Buggerveil re-release also contains two additional live songs from the Meridian show, "Gary Floyd" and "Matchstick."

"Live PCPPEP" is the first of three Surfers albums to feature clown imagery on the cover, the others being 1987's "" and 1995's "". The clown illustrations on its front and back covers were later combined and recolored for "The Hole Truth..."'s front cover. In a bit of a rarity for the band, the back cover includes the album's track listing.

The Surfers' first official live recording primarily contains performances of songs from the band's 1983 debut EP, "Butthole Surfers" (a.k.a. "Brown Reason to Live", a.k.a. "Pee Pee the Sailor"), leading some fans and critics to joke that they released the same album twice. This isn't strictly the case, as "Live PCPPEP" also has one track from the then-upcoming album, "" ("Cowboy Bob"), as well as another that has never been released on a Surfers studio album ("Dance of the Cobras").

This was the last Surfers album on which and guitarist would equally split lead vocal duties, with Haynes singing most, if not all, of the songs on later releases. This album also marked the debut of the first female Surfer, Teresa Nervosa, who was one of the band's two drummers (the other being ). [ [http://www.trouserpress.com/entry.php?a=butthole_surfers Butthole Surfers article] at [http://www.trouserpress.com Trouser Press] ] With her arrival, the band's core classic lineup – Haynes, Leary, Coffey, and Nervosa – was set. With the exception of a number of different bass players, it remained largely unchanged until Nervosa's final departure in 1989.

All songs written by the Butthole Surfers.