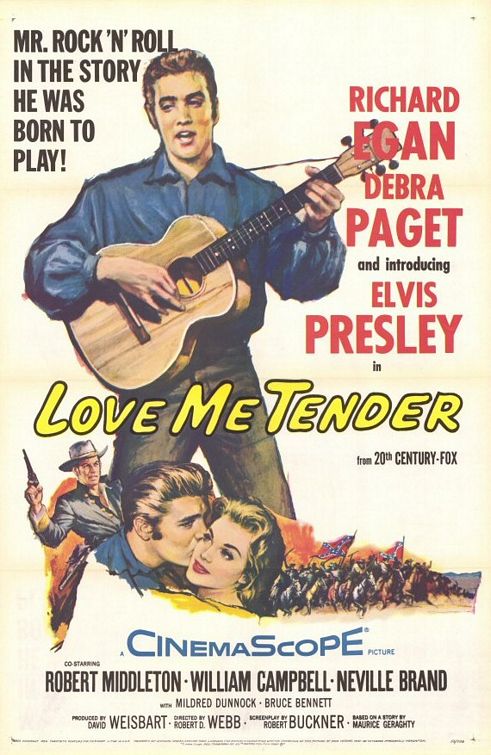 "Love Me Tender" is an American directed by , released by on , 1956. The film stars , , and . It is Presley's movie debut, in the Western genre with musical numbers, filmed in black and white.

In the film, Presley plays Clint Reno, one of the who stayed home while his brother went to fight in the for the . The family is mistakenly informed that one of the brothers, Vance, has been killed on the battlefield. When his brother Vance comes back from the war, he finds that his old girlfriend, Cathy, has married Clint. Although Vance accepts this wholeheartedly ("We always wanted Cathy in the family"), the family has to struggle to reach stability with this issue. As a Confederate soldier, Vance is involved in a train robbery, in which he steals Federal Government money. A conflict of interest ensues when Vance tries to return the money against the wishes of some of his fellow Confederates.

The film reaches its tragic conclusion with a gunfight between the two Reno brothers, ending with Clint's murder.

Instead of a full long-playing album , for "Love Me Tender" the four songs appearing in the film were released as an extended-play, seven-inch record on , "Love Me Tender", catalogue EPA 4006, during November 1956. It peaked at #9 on Top Pop Albums chart, as well as making it to #35 on the singles chart. The four EP soundtrack songs were recorded in a single at Fox's Stage One in , at three sessions in August, September, and October 1956. The title song, "Love Me Tender," had already been released as a single on , , and went to #1 on the singles chart. The music was based on the Civil War "," with new lyrics by . Darby, in fact, wrote all of the soundtrack songs, but credited them to his wife, , while the Colonel cut his publishing company, Hill and Range, in on the royalties by further crediting the writing to Presley as well. This was somewhat common practice in the .

A reprise of "Love Me Tender" was also recorded and is heard at the end of the film; this short track was not released until after Presley's death. The sessions for these songs were the only time in the decade that Presley recorded with musicians outside his regular coterie.

*This film was in the top 10 grossing films of 1956 grossing to #8
*This film was originally titled "The Reno Brothers", but because Elvis' "Love Me Tender" was a big hit at the time, the film was retitled as such.
*A somewhat more realistic film telling the story of the Reno Brothers, "" starring , had been released by RKO Radio Pictures only the year before.
* During one scene in the movie, Elvis plays a Gibson L-5, which was not invented until 1922, even though the movie is set during the American Civil War.Elvis' mother, Gladys, was so upset that her son had died in the movie, that Elvis told Colonal Parker, that he never wanted to be killed in any more movies. And he never was.

*
* [http://www.elvispresley.com.au/ For Elvis Fans Only] Website decitated to Elvis Presley's Movies.
* [http://www.americanmusicpreservation.com/earlyelvis.htm The Truth Behind Love Me Tender]