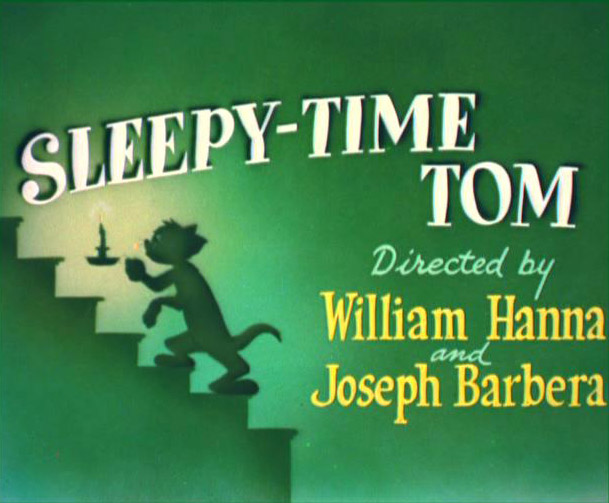 Sleepy-Time Tom is a 1951 one-reel and is the 58th "" cartoon that was created by directors and , produced by , scored by and animated by Ed Barge, Kenneth Muse, Irven Spence and Ray Patterson. The short was released in theaters on .

The cartoon begins with Tom and several of his cat friends (Butch, orange cat (named Lightning, first appeared in 1948 ""), brown cat (named Meathead, first appeared in 1943 "") and orange-yellow cat (named Scamper, first appeared in this cartoon) singing loudly "Good Night, Ladies" in the middle of the night. The cats drop Tom off at home, who is by now, very tired. He climbs up onto the window ledge. (portrayed by ) chastises Tom: "Well, Mr. Playboy, while you is out partyin' all night, I has to keep that mouse out of the frigerator. That's your job, not mine. Get up! Now get in there." Tom goes to the kitchen. Mammy asks: "Is you asleep?" Tom shakes his head. "Listen here, Night Owl. If I catch you asleep on the job, you is goin' out! Understand?" Jerry happens to be within earshot of Mammy's warnings, and decides to make life difficult for Tom, encouraging the cat to fall asleep (setting up a bed on the kitchen table, using a loaf of bread as a pillow; tripping him up onto a blanket; turning on a radio that is playing a slow song) in order to get him thrown out.

Keeping guard with a baseball bat outside Jerry's hole, Tom dozes off and loses grip of the bat, causing it to fall on his head and wake him up. Tom drinks plenty of coffee to keep himself alert, but after drinking from the whole pot, it ends up on his head, while Tom sleeps, until Mammy removes the pot. Tom tries everything to stay awake, such as holding his eyes up with toothpicks, which promptly snap under the weight of Tom's eyelids. Tom later remedies this by using sticky tape to hold his eyes open, but this also fails.

Finally, Tom cunningly paints yellow circles on his eyelids to give the illusion that he is awake though his eyes are closed. Mammy is led to believe that Tom is wide awake, but Jerry sees through Tom's ploy. He is given an idea, and we see him carrying it out by painting some signs. Jerry rips off some of Tom's fur. The cat is immediately woken and chases after Jerry, stopping to read the signs (which resemble the popular road signs): "Are you sleepy? Want a bed? Solid comfort - straight ahead". Jerry's signs entice Tom to the bedroom, where Tom falls asleep on the master bed. Jerry watches as an unsuspecting Mammy sees Tom on her bed and violently throws him out of the house. Tom crashes into a fence, but is too tired to do anything. He slinks down and falls asleep on the sidewalk, using a brick as a pillow. Around the corner come Tom's friends (from the beginning of the cartoon), still partying through the night. They spot Tom and drag him along with them.