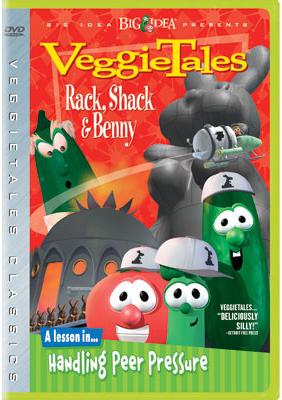 "Rack, Shack, and Benny", released in October 1995 on VHS is the fourth episode of the "" animated series. Subtitled "A Lesson in Handling Peer Pressure", it teaches viewers that they should resist peer pressure and stand up for what they believe.

The video retells the story of the from the book of . In this Biblical Story, King requires that all his subjects bow down before a . But three men, Shadrach, Meshach, and Abednego, refuse and are thrown into a furnace. Miraculously they aren't harmed, and Nebuchadnezzar recognizes the power of their God.

"Rack, Shack, and Benny" keeps true to the original story but places it in a chocolate factory where all employees are required to bow down before a giant chocolate bunny and sing "The Bunny Song".

The show starts with alone. appears on the countertop wearing an oven mitt on his head. When asked why, he says it's because he saw it on the cover of "Veggie Beat" magazine and that everyone's doing it. Unable to see, however, he crashes into the sink. Bob reads a letter about and the story begins.

The story is told by , who made his debut on this episode. We are introduced into the world of the Nezzer Chocolate Factory where the employees work hard all day making chocolate bunnies on an assembly line. In celebration of selling their two-millionth chocolate bunny, Mr. Nezzer announces that for 30 minutes all employees may eat as many bunnies as they want. While all tear ravenously into the chocolate, Shack convinces his friends Rack and Benny that they should not gorge themselves on candy, as their mothers and fathers had taught them.

When Mr. Nezzer comes out to soak up the appreciation of his employees, he finds them all lying ill… except for three. Rack, Shack, and Benny are rewarded and made Junior Executives (they originally worked in the plant) The following day Mr. Nezzer calls them into his office and tells them that he has constructed a convert|90|ft|m|sing=on high bunny; he believes that if the bunny were a "big" bunny, then all his workers would love it as much as he. To make matters worse, he also reveals the dreaded "Bunny Song", whose lyrics state that nothing in the world is more important than the bunny. He intends to force all his employees to bow down before the bunny statue and sing the song; those who refuse will be thrown into the factory's furnace like the "bad bunnies".

Naturally, this causes Rack, Shack, and Benny great concern since they don't agree with the words in the song. And when the time comes they refuse to bow and sing. Mr. Nezzer condemns them to the furnace, but gives them one last chance to sing the song; still they refuse, explaining that they were taught to stand by what they believe is right.

Mr. Nezzer sends them down a chute into the furnace, but Laura Carrot rescues them with a delivery truck. Her rescue attempts are thwarted though, and in spite of her efforts, they are dropped into the furnace anyway. But they do not burn. A fourth person appears in the furnace ("He's really shiny," says Mr. Lunt) and they are spared. Rack, Shack, and Benny emerge from the furnace unscathed. Mr. Nezzer reconciles with himself. The story ends with a song about standing up for what you believe in.

Back on the countertop Bob and Larry wrap up, but Larry is still stuck in the sink. He recognizes now the futility that landed him there, that just because everyone else is wearing an oven mitt doesn't mean that he has to. He laments his wasted life, but Bob offers to help and ends up stuck in the sink himself as the episode ends.

Changes to "The Bunny Song"

In the original edition of "Rack, Shack, and Benny", Mr. Nezzer sings "The Bunny Song" with lines such as "I don't love my mom or my dad, just the bunny," and "I won't go to church and I won't go to school." As the writer mentioned in an interview on the DVD edition, he hoped that kids who saw the protagonists refuse to sing the song would recognize its negative context as unacceptable, but unhappy parents wrote to Big Idea complaining that their kids were singing in public about not loving their mom or their dad. Vischer said the lesson he learned was never to mix negative lyrics with a catchy tune since children will sing the song irrespective of the content.

For their sing-along video, a "New and Improved Bunny Song" was written which had a repentant Mr. Nezzer singing that eating too much candy is wrong and that church and school are important. In the second edition of the video, the original offending lines were dubbed to "I don't love my soup or my bread, just the bunny," and "I won't eat my beans, and I won't eat tofu", respectively.