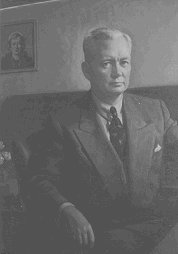 Llewelyn Sherman Adams (January 8, 1899 - October 27, 1986) was an American politician, best known as for President , the culmination of a relatively short (18-year) political career that also included a stint as . He lost his White House position in a scandal over a fur coat.

Born in East Dover, , Adams was educated in public schools, graduating from Hope High School. He received an undergraduate degree from (1920), having taken time off briefly for a six-month World War I stint in the . He then went into the lumber business, first in (1921), then to a combined lumber and paper business in Lincoln, . He also was involved in banking.

Adams entered state politics as a Republican legislator (1941-44; Speaker of the House, 1944). He served a term in the (1945-47), making a failed effort to capture the 1946 Republican gubernatorial nomination in New Hampshire. He lost to incumbent, ; he later won this office in 1948.

When Adams took office as governor, New Hampshire was suffering post-war recession. He called for frugality and thrift in both personal and state expenditures. Retirees were (and are) a significant part of New Hampshire's population; Adams called for increased state aid for the aged, and for legislation which would enable the state's seniors to qualify for . In 1950 he formed a Reorganization Committee to recommend changes in state operations, and he called for the legislature to act on the recommendations.

Adams's clipped New Hampshire twang and calls for frugality made him a virtual poster boy for Republican values of the time. He served as chairman of the (1951-52), and was then asked to be White House Chief of Staff for the new Republican president, Dwight D. Eisenhower.

Adams took his role as Chief of Staff very seriously; with the exception of Cabinet members and certain NSC advisors, all requests for access to Eisenhower had to go through his office. This alienated traditional Republican Party loyalists. Adams was one of the most powerful men in Washington D.C. during the six years he served as Chief of Staff to President Eisenhower. Because of Eisenhower's highly formalized staff structure, it appeared to many that he had virtual control over White House staff operations and domestic policy (a 1956 article in Time Magazine entitled "OK, S.A." advanced this perception). The extent of internal strife between strong willed personalities was chronicled in his 1961 memoir "First Hand Report". Among the heated conflicts within the Eisenhower administration were the best method to handle flamboyant personalities such as U.S. Senator and anti-Communist crusader . Adams was a frequent broker of such controversies. When Adams resigned in 1958, and died the same year, the administration went into a two year period that lacked direction. Author and movie critic Michael Medved wrote a book on Presidential aides called The Shadow Presidents. He mentioned Adams was probably the most powerful Presidential Chief of Staff in history. He told of a joke that circulated around Washington in the 1950s. Two Democrats were talking and one said "Wouldn't it be terrible if Eisenhower died and Nixon became President?". The other replied "Wouldn't it be terrible if Sherman Adams died and Eisenhower became President!".

Adams was pressured to resign in 1958, when a House subcommittee revealed Adams had accepted an expensive vicuña overcoat and oriental rug

Adams returned to where he started Corporation, today a major resort. He died in 1986. His remains are buried at Riverside Cemetery, also in Lincoln.

Adams was married to Rachel White in 1923. They had one son, Samuel, and three daughters, Jean, Sarah, and Marion.