Captains of the Clouds

Captains of the Clouds 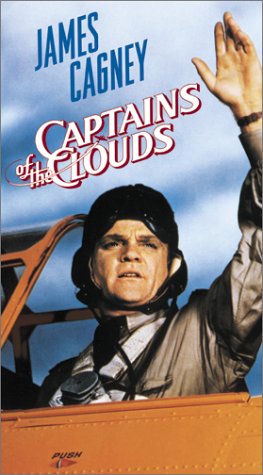 "Captains of the Clouds" is a fy|1942 , directed by and starring . It was produced by William Cagney (James Cagney's brother), with as executive producer. The was written by Arthur T. Horman, Richard Macaulay and Norman Reilly Raine, based on a story by Horman and Roland Gillett. The cinematography was by Wilfred M. Cline and Sol Polito and was notable in that it was the first feature length Hollywood production filmed entirely in Canada. [Barris 2005, p. 164.]

The film stars and as Canadian pilots who do their part in the Second World War, and features , , , and Reginald Denny in supporting roles. The title of the film came from a phrase used by , the First World War fighter ace, who played himself in the film.

The music score is by , and wrote the title song (lyrics by ) which is used as a march in the film. Later, "Captains of the Clouds" was adopted as an official song of the , although its use today is largely ceremonial. [Jablonski, Edward. "Harold Arlen: Rhythm, Rainbows, and Blues". Boston: Northeastern University Press, 1996. ISBN 1-55553-263-2.]

Brian McLean (James Cagney), Johnny Dutton (Dennis Morgan), "Tiny" Murphy (), "Blimp" Lebec () and "Scrounger" Harris (Reginald Denny) are s competing for business in rugged , in 1939, as the Second World War is beginning. While Dutton flies by the book, McLean is a seat-of-the-pants kind of pilot, mirroring the differences in their personalities.

When Dutton saves McLean's life by transporting a doctor under dangerous flying conditions, McLean is grateful. He steals and marries Dutton's no-good girlfriend Emily Foster () in order to save him from a life of misery. Dutton not surprisingly doesn't see it that way and their friendship comes to an abrupt end. Depressed, Dutton gives his savings to charity and enlists in the .Later, after hearing 's "" speech on the radio, McLean and the other bush pilots attempt to enlist in the air force, only to find that they are too old for combat. They agree to train as flight instructors for the . Their superior officer is none other than Dutton. McLean's brash and fiercely independent nature clashes with the military way of doing things and he inevitably washes out. For revenge, he and Tiny buzz the airfield in their s when renowned Canadian First World War ace Air Marshal William "Billy" Bishop (playing himself) attends his group's graduation ceremony. Unfortunately, Tiny suffers a blackout (loss of vision due to s) during a strenuous maneuver, crashes, and dies.

When two transport aircraft crash, killing all 44 ferry pilots aboard, there is a desperate need for pilots to transport bombers to Britain. McLean and other civilians volunteer to fly the unarmed bombers from Newfoundland. He finds himself in a flight commanded by Dutton when they are attacked by a German fighter. "Blimp" Lebec is shot down. With his navigator Scrounger dead and no other way to fight back, McLean uses his superb flying skills to crash his unwieldy bomber into the nimble fighter, sacrificing himself to save the remainder of the flight.

The films ends with an epilogue chronicling the contributions of the Royal Canadian Air Force to the making of the film.

During preproduction, Joseph W.G. Clark, the public relations director of the was heavily involved in promoting a film project that was initially identified as "Bush Pilots" based on a script submitted by Canadian screenwriters. With RCAF backing, Hal Wallis and Jack Warner were approached in Hollywood to undertake a "patriotic film." Warner had been enthusiastic and took over the details of casting a bonafide star to front the project. After bringing up , and , the decision rested on but Warner Brothers was still unsure if he could carry the film. [ Dunmore 1994, p. 264–265.] After numerous attempts to rewrite the script into a more acceptable form, a final screenplay emerged now graced by the name "Captains of the Clouds" borrowed from a Victory Loans speech given by "Billy" Bishop. The only holdup was eventually resolved when Warner persuaded its resident "cocky guy" as producer had dubbed him, 42-year old James Cagney, to take on the lead male role. [ Barris 2005, p. 145.]

This film was Cagney's first in . His participation in the production has been characterized as reluctant, and he only accepted after his brother was taken on as an associate producer. He quipped, "I didn't like this story the last four times I did it and I don't like it now!" fearing that he was immersed in one of his typical Warner Brothers "potboilers" in a role that he had reprised numerous times. In certain scenes, Cagney is improvising and his loose interpretation is evident in the cabin scene when he is playing against his cronies, and veers off the script pages, reverting to the cocky Cagney persona he had had cultivated in countless earlier features. [ [http://www.amazon.com/Captains-Clouds-James-Cagney/dp/B000MTEFWI Captains of the Clouds (1942) review] ]

"Captains of the Clouds" was produced with the full cooperation of the Royal Canadian Air Force to promote enlistment in the British Commonwealth Air Training Plan. Intended also as a rousing "war preparedness" film for American audiences, by the time it played, the U.S. was already at war, but it did serve as a showcase of the Canadian war effort. The Warner Brothers principal cast and production crew of over 80 technicians along with "half a million dollars of colour cinematography equipment" came from Hollywood, crossing into Canada on . [Barris 2005, p. 145.] Much of the early footage involved a number of s at the Woodcliff Camp on Trout Lake and nearby Camp Caribou on .

Principal photography did not go well as countless incidents slowed production. One of the huskies that were key to a scene, bit Morgan, opening up a gash on his hand while Cagney in an uncharacteristic move, decided to forgo a stunt double and play out the scene where his character is struck by a whirling propeller. At first things proceeded smoothly but when it came time for him to fall into the lake, he overdid it and suffered a real concussion, putting the 10-day shoot located at farther behind schedule. Weather was a constant challenge and with the need to insure continuity, small scenes became unnecessarily complex with a typical shooting day lasting almost into the night. One 30-second scene with all the principals running along the dock took an entire day to complete, with Cagney, Hale and Tobias barely able to stand at the end of filming. [ Dunmore 1994, p. 269.] With a Hollywood production in their midst, North Bay residents became such a persistent nuisance that the crew reverted to actually sending messages out of the location site by s. [ Barris 2005, pp. 154–155. Note: Even though it seems unlikely, the secluded location and lack of telephones necessitated the use of homing pigeons obtained locally to send out messages to the other film units.]

"B-roll" military background sequences were shot at RCAF Air Stations at Uplands, Trenton, Dartmouth and Mountain View. The "Wings Parade" (officially the "Presentation of Wings Ceremony") filmed at the No. 2 Service Training School at RCAF Uplands involved the graduation service of 110 RCAF cadets that became the most complex scene of the film. Over 100 Harvard training aircraft flew overhead in a salute to the graduates. The climactic ferry mission was staged out over the Atlantic from RCAF Air Station Dartmouth using the base's operational Lockheed Hudson bombers with a fighter camouflaged as a German fighter, providing the necessary aerial component. Due to the prominent Luftwaffe markings on the RCAF fighter, special alerts had to be posted in order to prevent the "trigger-happy" home defence gunners from shooting down their own aircraft.

Released in an era of patriotic films that skirted propaganda themes, "Captains of the Clouds" received an enthusiastic public acceptance. Although it was a "Hollywood" production, the film premiered simultaneously on in New York, London, Ottawa, Cairo, Melbourne, Toronto, Winnipeg and Vancouver with RCAF pilots transporting film copies to all these cities. [ [http://www.imdb.com/title/tt0034578/trivia Captains of the Clouds] ] [Oriss 1984, p. 44.] The public reaction can be partly attributed to the plot line that revolved around the unique Canadian wilderness and the enigmatic bush pilot mystique. "So Full of Spectacle and Glory it Had to be Made in Technicolor!" was the ad copy that was used. The vivid aerial scenes filmed in Technicolor were another aspect of the expensive production that garnered critical attention. Although reviews were mixed especially in regards to the stagey plot and forced "romantic" overtures, the aerial scenes were considered the film's redeeming feature. [Arnold, Jeremy. [http://www.tcm.com/tcmdb/title.jsp?stid=3444&category=Articles "Captains of the Clouds (1942) review."] Turner Classic Movies.]