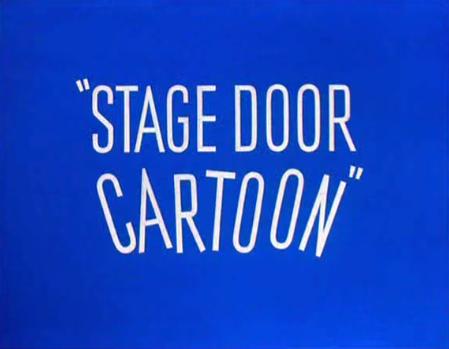 The film starts as a typical Elmer-hunting-rabbits cartoon; he hooks a carrot to his fishing hook in an attempt to catch Bugs, who turns the tables on Elmer by attaching the hook to his pants and "reeling" him in. Bugs then throws Elmer back for being too small and ends up getting chased to a theater. Bugs gets a chance to do his tap-dance routine, one of his recurring schticks. He then tricks the shy Elmer onto the stage. First, he prompts Elmer through some classic acting emotive poses, seguéing into face-making, which draws a ripe tomato in the face from the jeering crowd. Then he tricks Elmer into doing a "", whereupon a southern sheriff (a primordial Yosemite Sam, with the same raucous drawl as the similar-sounding ) arrests Elmer.

*Bugs' goofy yell to Elmer, "Here I ya-um!" was a catchphrase used by radio star 's country bumpkin character "Clem Kadiddlehopper".
*Bugs' statement to the audience at the end of the film, "I got a million of 'em!" was a catchphrase; Bugs mimics Durante's standard body language while saying it.
*The basic plotline would be re-used in the Bugs-and-Elmer cartoon, "". Also, the same high-dive gag would be re-used and expanded for the Bugs Bunny cartoon "", in which (who, as previously noted, appears in prototypical form in this cartoon) would play a large part as Bugs's antagonist.