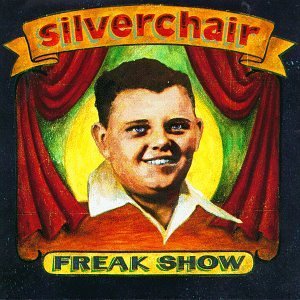 "Freak Show" (with special characters/capitals: FREAK SHOW) is the second by n band, , released in 1997. While this album certainly bears elements of , it aims slightly more at . Songs such as "No Association" and "Learn to Hate" are descriptive of and set a theme of anger. "Freak Show" is certified Gold in the .

A CD version also includes interactive elements for the music set up as a .

"No Association" was featured in the movie "Blackrock" and was also performed two years prior to the release of "Freak Show".

describes the album's title as comparing Silverchair to a traveling . He also said that some of the lyrics were lightened due to their strong intimacy with himself.

Some of the songs also had different titles prior to the album's release. These include: "Cat and Mouse" ("The Closing"), "The Poxy Song" ("The Door"), and "Punk Song #1" ("Lie to Me"). A "Punk Song #2" was recorded and not renamed. It was released on the "Freak" single.

The "Freak Show" release was originally scheduled for fall of 1996 but was pushed back to avoid it debuting alongside 's "". They also wanted to finish all the promotion and press matters.

*The album is available also in black vinyl and LTD Ed. Yellow vinyl (3000 copies in UK only), and in a Ltd. cassette.