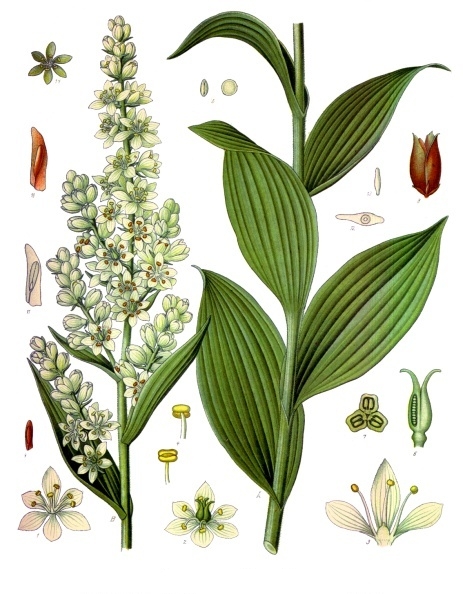 "Veratrum" is a genus of coarse, highly perennial s of the family. In English they are usually known as the False hellebores. Members of "Veratrum" are known both in western and as toxic herbs to be used with great caution. It is one of the medicinals {"Li lu") cited in Chinese herbal texts as incompatible with many other common herbs because of its potentiating effects. Especially, many root (and root-shaped) herbs, particularly , san qi, and hai seng, will create and or exacerbate a toxic effect [Bensky, D., Clavey, S., Stoger, E. (3rd edition 2004) Materia Medica Eastland Press, Inc. Seattle, p 461] .

"Veratrum" species are used as food plants by the e of some species including .

Birth defects in livestock grazing on "Veratrum californicum" (native to the western ) led to the study of and which are important in animal including treatment.

Widely distributed in montane habitats throughout North America. Veratrum species prefer full sunlight and deep, wet soils, and are common in wet mountain meadows, swamps, and near streambanks. Veratrum species occur from Alaska south into the mountains of California, and are widely distributed throughout the Rocky Mountains. Veratrum is very abundant in Eastern North America from Quebec southward through the s into North Carolina.

"Veratrum" species contain highly toxic steroidal alkaloids that can cause rapid cardiac failure and death if ingested or introduced into the bloodstream. Native Americans used the juice pressed from the roots of this plant to poison arrows before combat. The dried powdered root of this plant was also used as an insecticide. [Edible and Medicinal plants of the West, Gregory L. Tilford, ISBN 0-87842-359-1]

"Veratrum" species are an important source of life-saving medications used in modern medical preparations which lower blood pressure, slow the heartbeat, and are used for cancer treatment. derived from "Veratrum" species is a potent that is an effective treatment for several deadly and malignant cancers, including , , , , and [cite journal|title=Effects of oncogenic mutations in Smoothened and Patched can be reversed by cyclopamine|journal=Nature|date=2000-08-31|pages=1005–9|volume=406|issue=6799|doi=10.1038/35023008|author=Beachy, Philip A.PMID|10984056] .

During the winter months, when the plant enters its dormant stage, it degrades and metabolizes most of its toxic alkaloids. Herbalists and Native Americans who used this plant for medicinal purposes harvested the roots during the winter months when the levels of toxic constituents were at their lowest. "Veratrum" species produce highly toxic steroidal alkaloids only when the plants are in active growth. The root and the seeds are the most poisonous parts of the plant.

Western American Indian tribes have a long history of the use of this plant as an effective treatment for cancerous tumors, and combined minute amounts of the winter-harvested root of this plant with "" to potentiate its effects and reduce the toxicity of the herb. The plants teratogenic properties and ability to induce severe birth defects were well known to Native Americans. [Edible and Medicinal plants of the West, Gregory L. Tilford, ISBN 0-87842-359-1]