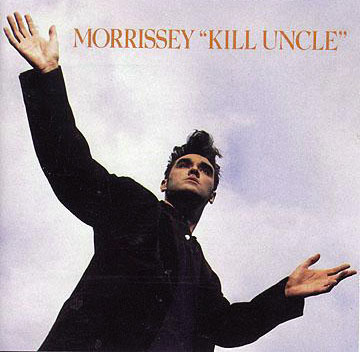 "Kill Uncle" is an by , released on , . It is generally considered Morrissey's most unconventional album, probably due to its mature ("There Is a Place in Hell for Me and My Friends") aspects combined with quirky music and lyrics that range from ironic and tongue-in-cheek to some of his more introspective.

The album was recorded when Morrissey was in a transitional phase. He had parted ways with producer but had not yet started working with his future long-term team of guitarists and . As such, the album, produced by and with most music written and guitar work done by 's presents Morrissey singing to an unfamiliar style of music.

"", the album's the lead single and opening track, reached #26 in the UK and #2 on the US Modern Rock chart. Morrissey's lyrics describe "frank and open, deep conversations" that get him nowhere and leave him disheartened. The final verse, however, sees Morrissey singing "Won't somebody stop me from thinking? From thinking all the time. So deeply, so bleakly..." which critic David Thompson interprets as indicating that the conversations he so dreads are in fact with himself. [ cite web | url= http://www.allmusic.com/cg/amg.dll?p=amg&sql=33:wh98sf2ra3dg | last+ Thompson | first= David |title= "Our Frank" review | publisher= allmusic.com ] The song features some uncharacteristic production for the singer, with Morrissey's voice being overdubbed and echoed.

"Asian Rut" is a tale about the murder of an Asian by three English boys in which Morrissey's vocals are backed only by strings and bass, lending an eerie quality to the somber narrative. The song continues the tradition of Morrissey attacking English from a unique angle, first established with "Bengali in Platforms" on "".

"", the third track on the album, was released as a single, reaching #33 in the UK and #10 on the US Modern Rock chart. A drum loop, featuring bass drums and toms but no snare drums, repeats itself throughout the track. The strings from the first two tracks are present in the song as well, and they rise and fall in a fashion similar to "Our Frank". The song has Morrissey instructing the listener on how to make a song, as he sings, "Walk right up to the microphone and name all the things you love, all the things you loathe." [ [http://www.allmusic.com/cg/amg.dll?p=amg&sql=33:hc881yk6zzha allmusic ] ] A 'hard Rockabilly' mix of the song also exists.

"Mute Witness", the fourth track, features piano backing composed by . The song is a somewhat farcical tale of an attempt to get information out of a witness who cannot speak at a trial.

"King Leer" follows, anupbeat tune which has come under some criticism for its use of puns. [ [http://www.dailyrecord.co.uk/news/tm_objectid=16957786%26method=full%26siteid=66633%26headline=the-worst-lyrics-in-the-world--ever-name_page.html THE WORST LYRICS IN THE WORLD..EVER - The Daily Record ] ] [ [http://www.compsoc.man.ac.uk/~moz/lyrics/killuncl/kingleer.htm LASID - King Leer ] ] "Found Found Found", another Langer track, is the only heavy song on the album. Morrissey sings that he's found "someone who's worth it in this murkiness" but again gives the song a twist at the end, complaining that this person is "somebody who wants to be with me...all the time".

In "Driving Your Girlfriend Home," a ballad, Morrissey tells of how he's driving the girlfriend of one of his friends home. He reveals that she asks him, "'How did I end up so deeply involved in the very existence I planned on avoiding?'" and that "She's laughing to stop herself crying." These outpourings are interspersed with driving instructions, and Morrissey tells us, "I can't tell her" what he feels about her and that the ride concludes with them "shaking hands goodnight so politely." [ [http://www.compsoc.man.ac.uk/~moz/lyrics/killuncl/drivingy.htm LASID - Driving Your Girlfriend Home ] ]

The next track is "The Harsh Truth of the Camera Eye", often cited as Morrissey's most misunderstood song ever recorded. [ [http://www.compsoc.man.ac.uk/~moz/lyrics/killuncl/theharsh.htm LASID - The Harsh Truth Of The Camera Eye ] ] The lyrics are describing the "pain because of the strain of smiling" and the dichotomy between one's public image and private personality. The music consists of a carnival-like synthesizer and also features sound effects like that of a door slamming and a camera lens snapping, along with piano accompaniment.

"The Harsh Truth of the Camera Eye" is followed-up by "(I'm) The End of the Family Line". The singer rues that he will never have children, an insult into the "fifteen generations...of mine" that produced him. There is a hint that the reason for this is that protagonist is homosexual, as he sings that these generations were "all honoring nature, until I arrive...with incredible style". [ [http://www.compsoc.man.ac.uk/~moz/lyrics/killuncl/imtheend.htm LASID - (I'm) The End Of The Family Line ] ] The lyrics are complemented by a subdued guitar backing, and the song features the kind of false fadeout that first appeared on such Smiths songs as "That Joke Isn't Funny Anymore".

The album closes with "There Is a Place in Hell for Me and My Friends", a simple piano piecethat again reflects the existential longing of the album and showcases 's influence as the New Wave .

* All tracks by Morrissey and Mark E. Nevin unless otherwise noted.