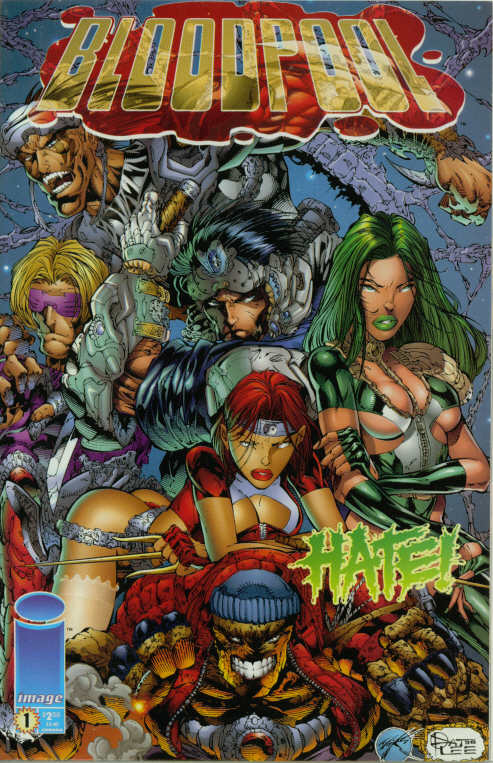 "Bloodpool" is a group of and a series created by . It was published by in 1996 under Liefeld's . The team's roster includes "Rubble, Task, Seoul, Psilence, Wylder, and Fusion." They are the and the , the , the channelers, and the alchemists. The kids who have made breaking up into an offensive art. superheroes recruited by the government for the eventual inclusion in the prestigious Youngblood team. They were poked, prodded, trained and enhanced. And when a new administration cut funding, the members of Bloodpool were out on the streets.

Task: a young super-soldier possessed of a powerful regenerative factor. Task's body has also been enhanced with cybernetics and genetic engineering granting him extraordinary strength, speed, agility and reflexes and he is an expert in various weapons.

Psilence: a beautiful young telepath, who acts as the team's living communication system with her powers. True to her name, Psilence is mute, and communicates with telepathy.

Fusion: a young man with the power to manipulate matter, both organic and inorganic, and transmute substances into different forms. For example he can turn a person to stone by holding a rock and then touching them.

Seoul: a young female channeler and warrior, she is an expert fighter and extremely athletic and fast, but her primary power is that she can summon the spirits of dead warriors to enhance her abilities in battle.

Rubble: a genetically engineered superhuman who is made of living stone and able to alter other earthen materials nearby. He can use parts of his body as blunt objects, as he can easily break them off without injury. Hence his name, "Rubble".