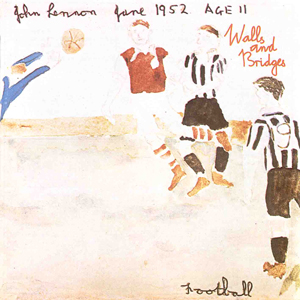 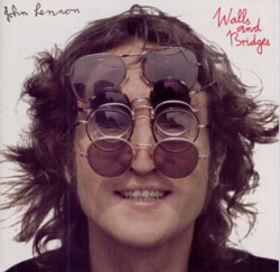 
"Walls and Bridges" is an album by , released in October 1974. Recorded and issued during his estrangement from , the album caught Lennon in the middle of his infamous "lost weekend", a period that lasted some eighteen months. It was the last album that Lennon released without input from his wife. Apparently, it was originally intended to be an acoustic, downbeat album, in the style of , but continued influence from friend inspired Lennon to add a decidedly more upbeat feel to many of the tracks (although some of the original feel is still prevalent in some songs).

In the fall of 1973, as "" was being released, Lennon decamped with his assistant-turned-lover to to record a s album with . After the sessions fell into disarray with alcohol, Spector disappeared for some time with the session tapes, requiring Lennon to re-record the bulk of the album later in 1974, eventually titled "Rock 'n' Roll" upon its early 1975 release.

John Lennon spent most of the first months separated from Ono carousing with Pang and various old friends, , and in particular. He contributed to Starr's "" and "" albums (the latter recorded with ) and also produced Nilsson's album "". But by the middle of 1974, Lennon began readying material for his own album, and headed to that June to rehearse and record with his chosen musicians, including friends on drums and on guitar.

Produced again on his own, "Walls and Bridges" has a decidedly more upbeat tone than "Mind Games", although many of the lyrics make it clear that despite the enjoyment of his freedom, Lennon missed Ono. "Going Down On Love", "What You Got", "Bless You" and "Nobody Loves You (When You're Down And Out)" are a testament to Lennon's heartsickness during this period. "Steel And Glass" and "Scared" were the latest in Lennon confessionals, especially the latter where he prophetically sings: "Hatred and jealousy gonna be the death of me; I guess I knew it right from the start".

On the upside, some of Lennon's most uplifting songs, namely its two singles "Whatever Gets You Thru The Night" and "#9 Dream", appear on "Walls and Bridges". The former, which features Elton John on piano and backing vocals, reached #1 in the US the same week that "Walls and Bridges" hit the top of the LP charts. Losing a wager he made with Elton about the single's commercial potential, Lennon appeared at John's show on , performing Lennon's current #1 hit together. In addition, ' "I Saw Her Standing There" and "Lucy In The Sky With Diamonds", Elton John's new single with Lennon on backing vocals, were also played to an uproarious audience, among whom sat, in a startling turn of events, Yoko Ono. While it proved to be John Lennon's last ever concert appearance, the backstage meeting with Yoko sowed the seeds of their imminent reunion.

During one of his sporadic visits from to see his father, eleven-year-old helped record a casual cover of "Ya Ya", which Lennon tacked onto the end of "Walls and Bridges" with the credit: "Starring Julian Lennon on drums and Dad on piano and vocals". May Pang recalled later the younger Lennon was disappointed when he heard the recording would make the album, telling his father "If I'd known, I would have played better."

"Walls and Bridges" was released in a remixed and remastered form in November 2005. The remastered version featured an alternate cover. This new cover retained Lennon's signature and hand-written title, but used one of the portraits Bob Gruen took for the album instead of Lennon's childhood drawing. The bonus tracks for the reissue include 'Whatever Gets You Thru The Night' performed live with Elton John, a previously unreleased acoustic version of 'Nobody Loves You (When You're Down And Out)' and a promotional interview with Lennon.

All songs written and composed by , except "Old Dirt Road", by John Lennon and .

Arranged and produced by John Lennon.

*: piano and harmony vocals on "Whatever Gets you Thru the Night" and Hammond organ and background vocals on "Surprise, Surprise (Sweet Bird of Paradox)".