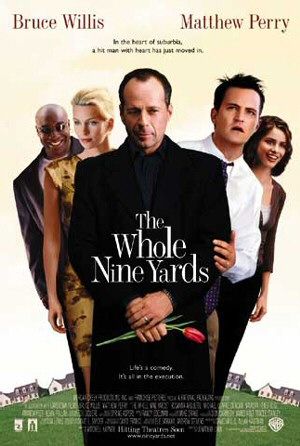 Nicholas 'Oz' Oseransky (Perry) is a depressed, slightly neurotic American dentist working and living in , . His wife and mother-in-law hate him, and his father-in-law has saddled him with a lot of debt. At work, Oz has made friends with his receptionist, Jill (Peet), who urges him to get away from his wife who she believes is "not a good person".

Jimmy "The Tulip" Tudeski (Willis), a hitman, moves in next door under the assumed name of "Jimmy Jones." The surname Tudeski is derived from the German surname "Dudezki". Having testified against the Gogolak family, a very dangerous family of mobsters, Jimmy is hiding out in . He immediately befriends Oz, who has realized who Jimmy is, because of a tattoo of a tulip on his arm. Oz's wife presses him to travel to , where he is to meet up with Janni Gogolak (Pollak), let him know where Jimmy "The Tulip" is and collect a finder's fee. Oz travels to Chicago, against his better judgement, but does not go to see Janni. Oz goes to his hotel room to find another notorious hitman, Frankie "Figgs" Figgaroa (Duncan), in his room. Frankie beats up Oz and takes him to meet Janni. It is at this meeting he first encounters Jimmy's wife, for whom Oz immediately harbors an attraction.

At the meeting, Janni explains that he intends to find out where Jimmy is, which Oz is coerced into admitting that he knows. Then Janni releases Oz, with the understanding that Frankie will go with him to assassinate Jimmy. Oz returns to his room, and immediately calls Jimmy. When Jimmy answers, Oz blurts out the whole mess, apologizing to Jimmy about revealing his whereabouts and imploring him to save himself. Jimmy, sounding unruffled, tells Oz to calm down and says that not only does he already know what happened, but that he also reassures Oz that it's all according to plan. Oz hangs up, contemplates his position, then goes to the bathroom to throw up.

When he is done, the doorbell rings. Oz opens the door to find, oddly enough, Jimmy's wife, who was at the meeting with Janni. She demands to know if Oz is telling the truth. When he admits it, she reveals that some time ago, Jimmy, his wife, and Janni set up a joint account containing millions of dollars. There is, however, a special stipulation--the money can only be withdrawn in person by all three principals--or two principals and the death certificate of the third, or one principal with two death certificates. Oz realizes this was Jimmy's plan--to kill Janni and his wife to get all the money.

A sequel entitled "" with most of the original cast was released on , .