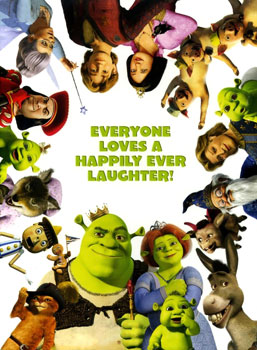 (Mike Myers), a solitary ogre, finds a surprise when fairy tale creatures are sent to live in his swamp by the evil (). Shrek befriends a talking Donkey (), and the two set off to meet with Lord Farquaad. Lord Farquaad needs () to marry him so that he will become king. So when Shrek and Donkey visit him, they are forced to rescue her from an enourmous fire-breathing dragon. The Dragon turns out to be a girl and she falls in love with Donkey. However Donkey escapes and Dragon chases them.

Once Shrek and Donkey rescued Fiona they take her back to Lord Farquaad. However, along the way, Shrek falls in love with Fiona. Fiona reveals she is cursed and turns into an ogress at night. The only way the curse can be broken is by true love's first kiss. Fiona and Farquaad have a marriage ceremony; however they are interrupted by Shrek who tells Fiona he loves her. Shrek and Fiona kiss and Fiona turns into an ogress permanently. Shrek gets his swamp back, and the two marry there. After a karaoke party the two set off on their honeymoon.

The film is set in a fairytale world, with funny appearances from commonly known fairytale characters.

The second film opens with Prince Charming () on a quest to rescue Princess Fiona from the Dragon. When he gets there he finds the wolf () from and in Fiona’s bed. He asks where Fiona is and the wolf tells him she is on her honeymoon with Shrek (Mike Myers). Once Shrek and Fiona (Cameron Diaz) return from their honeymoon, they find Donkey (Eddie Murphy) in the swamp who tells them he and Dragon are going through a rough patch. They then get invited to the land of by Fiona’s parents ( and ) who want to bless their marriage. When they arrive Shrek and Fiona aren’t what they expected. The evil Prince Charming and his mother, the Fairy Godmother (), are trying to break up Shrek’s marriage by making Fiona fall in love with Prince Charming. However it doesn’t work and Shrek and Fiona stay together. Shrek and Donkey get a new sidekick called Puss in Boots (). They have a lengthy quest to search the Fairy Godmother's cottage to get a love potion. At the end of the movie, King Harold turns into a frog.

Shrek (Mike Myers) and Fiona (Cameron Diaz) are reluctantly reigning over Far, Far Away during King Harold's (John Cleese) prolonged illness. The King promises that if they can find Fiona's cousin Artie (), he will make him the next in line, so Shrek doesn't have to run the country after his death. Further complicating matters is a little secret Fiona's been keeping (her ), but the biggest problem is Prince Charming (); he's gathered some new partners in crime and Far Far Away is going to go crazy.

A musical based on the first film recently had a pre-Broadway tryout in Seattle and will open on Broadway in December. [ [http://www.broadway.com/gen/show.aspx?SI=559922 Shrek the Musical] ]