Hydrogen electrode is based on the redox half cell:

This redox reaction occurs at platinized platinum electrode. The electrode is dipped in an acidic solution and pure hydrogen gas is bubbled through it. The concentration of both the reduced form and oxidised form is maintained at unity. That implies that the pressure of hydrogen gas is 1 bar and the activity of hydrogen ions in the solution is 1 molar. The activity of hydrogen ions is their effective concentration, which is equal to the formal concentration times the activity coefficient. Activity coefficients are close to 1.00 for very dilute water solutions, but are usually lower for more concentrated solutions. The Nernst equation should be written as:

During the early development of electrochemistry, researchers used the normal hydrogen electrode as their standard for zero potential. This was convenient because is could actually be constructed by having "[immersing] a platinum electrode into a solution of 1N strong acid and [bubbling] hydrogen gas through the solution at about 1 atm pressure". However, this electrode/solution interface was not entirely reproducible, so the standard for zero potential was later changed. What replaced it was a theoretical electrode/solution interface, where the concentration of H+ was 1m, but the H+ ions were assumed to have no interaction with other ion (a condition which is not physically attainable at those concentrations). To differentiate this new standard from the previous one it was given the name 'Standard Hydrogen Electrode'. [2]

NHE: potential of a platinum electrode in 1N acid solution (historical standard, no longer in use)

SHE: potential of a platinum electrode in a theoretical solution (the current standard for zero potential)

The choice of platinum for the hydrogen electrode is due to several factors:

The surface of platinum is platinized (i.e., covered with platinum black) because of:

Nevertheless, other metals can be used for building electrodes with a similar function, for example, palladium-hydrogen electrode.

Because of the high adsorption activity of the platinized platinum electrode, it's very important to protect electrode surface and solution from the presence of organic substances as well as from atmospheric oxygen. Inorganic ions that can reduce to a lower valency state at the electrode also have to be avoided (e.g., Fe3+, CrO42-). A number of organic substances are also reduced by hydrogen at a platinum surface, and these also have to be avoided.

Cations that can reduce and deposit on the platinum can be source of interference: silver, mercury, copper, lead, cadmium and thallium.

Substances that can inactivate ("poison") the catalytic sites include arsenic, sulfides and other sulfur compounds, colloidal substances, alkaloids, and material found in living systems.[4] 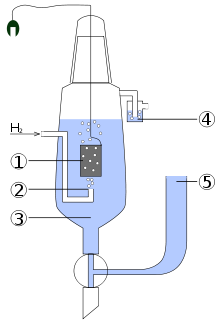 The scheme of the standard hydrogen electrode: