The Importance of Being Earnest (2002 film)

The Importance of Being Earnest (2002 film)

Infobox Film
name = The Importance of Being Earnest 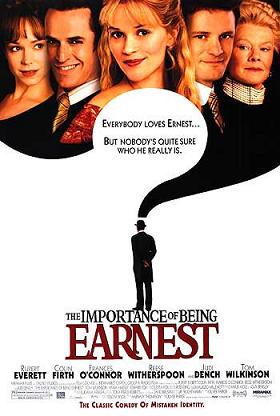 The Importance of Being Earnest is a 2002 film directed by , based on 's classic play "". The original music score is composed by . The movie grossed only about 8.3 million . [ [http://www.the-movie-times.com/thrsdir/moviesofyear.mv?moviesof2002+ByTGross2 Films of 2002, by total gross] ]

The plot revolves around two men in Edwardian , John (Jack) Worthing and Algernon (Algy) Moncrieff. Whenever Jack travels to from his estate he says he is going to see his (fictitious) wayward brother Ernest. Once in London he keeps his privacy by calling himself Ernest. This tactic is especially important as his beloved, Gwendolen, declares that she could only love a man named Ernest. Her cousin, Algy, is the one person who knows Jack's secret and one day he travels down to the estate, announcing himself to Jack's attractive ward Cecily as the infamous Ernest. Cecily is enamoured with him and his name, and upon Jack's return home and Gwendolen's unexpected arrival it becomes clear there are both too many and too few Ernests earnestly courting.

The film won the 2003 Italian National Syndicate of Film Journalists's Silver Ribbon award for Best Costume Design, the movie's costumes being designed by .

was nominated for a (Choice Actress - Comedy) for her performance as Cecily.

* Actress , who plays Lady Bracknell as a young dancer, is the daughter of Dame , who plays the older Lady Bracknell.
* The where Rupert Everett slaps Colin Firth on his rear end and where Everett es Firth's were bed. Director Oliver Parker thought Firth's stunned reaction was so humorous he decided to leave it in.
* The business with 'Ernest's' bill at the Savoy, and with the money collectors coming to Jack's country home, are taken from material Wilde cut from the play prior to its publication.
* Though cut from the revised version, the Molton can be seen in the of many scenes.
* The producers of the film paid 50,000 pounds to use as Jack's home in the country. [ [http://findarticles.com/p/articles/mi_qn4158/is_20020908/ai_n12647014 The importance of being able to pocket pounds 50,000 for one's | Independent, The (London) | Find Articles at BNET.com ] ]

*
*
* [http://www.wheredidtheyfilmthat.co.uk/location.php?loc_id=130 Where Did They Film that?] "The Importance of Being Earnest"
* [http://www.miramax.com/theimportanceofbeingearnest/index.html Official Site]