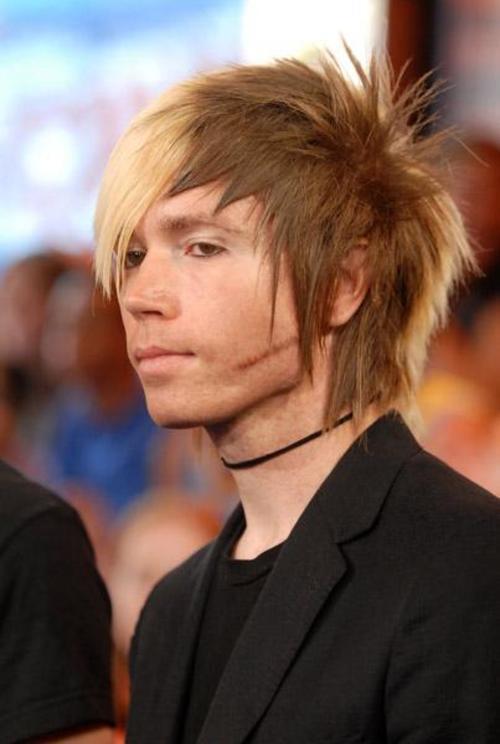 Jade Errol Puget (born , in , ) is the guitarist for rock band AFI (joined in 1998), and the keyboardist/synthesizer operator for the electronic duo . He takes his stepfather's surname. Puget is a , and is along with Davey Havok, the vocalist of AFI. Jade has a half-sister- Alishea, a half-brother named Gibson, and a younger brother named Smith, who is also AFI's Tour Manager. Gibson appears in the poem in the beginning of This Time Imperfect on the CD .Jade dropped out of school at the age of seventeen, yet still moving on to go to UC Berkeley, where he majored in social theory. After graduating from college, Jade then joined the likes of AFI.He has a various tattoos- an "18" (which was originally a "13"), a cat jumping through a 9 (a tattoo he shares with Nick 13 of and ), and the word "Committed" arched across his stomach from his previous engagement with high school girlfriend Katrina. On his arms, he has the words "Boys Don't Cry" (a homage to ) and the words "Love Will Tear Us Apart" (a tribute). Jade plays a and dual rectifier amp heads with Marshall cabs. He used several Les Pauls, a Gibson SG and couple of Fender Telecasters for the recording of Sing the Sorrow. He has said that he doesn't usually play SGs, but he has been known to play a from time to time.

Before joining AFI in 1998, Puget played in various bands, including Loose Change and [ [http://www.afireinside.net/bio/default.aspx AFI | Official Site ] ] . His first album with AFI was "" (1999). The first song he wrote for the band was "Malleus Maleficarum". ["I Heard a Voice" DVD] The band released "" in 2000, "" in 2003 and "" in 2006. AFI won a VMA for best rock video for "Miss Murder" in 2006. Puget is also a member of with AFI bandmate . Their debut album, "", was released on , . Puget recently remixed 's newest single "", released as an international bonus track from the album "" (2007) [ [http://www.shoutmouth.com/index.php/news/Jade_Puget's_Remix_of_'Heart-Shaped_Glasses'_Available_Now Jade Puget's Remix of 'Heart-Shaped Glasses' Available Now | Shoutmouth ] ] . He also recently remixed the song 's "Where the Moss Slowly Grows" off the band's latest album "". [http://www.tigerarmy.com/news.html May 18, 2007 ] The song is only available through purchasing the album on . He also did some additional production on 's debut album "" [ [http://thedearanddeparted.com/ MySpace.com - The Dear & Departed - ORANGE COUNTY - New Wave / Gothique / Rock - www.myspace.com/thedearanddeparted ] ] . Additionally, he recently remixed 's UK single "Ready, Set, Go" from their first English album, Scream [http://www.tokiohotelamerica.com November 05, 2007] . Also, his remix of 's song "Vertigo" (called "Airplanes") appeared as a bonus track on the band's album "."