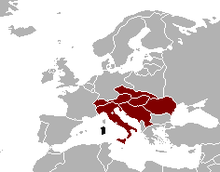 The Mitropa Cup, officially called the La Coupe de l'Europe Centrale was one of the first really international major European football cups for club sides. After World War II in 1951 a replacement tournament named Zentropa Cup was held to resume the rich tradition of this competition.

A first "international" competition for football clubs was founded in 1897 in Vienna. The "Challenge Cup" was invented by John Gramlick Sr., a co-founder of the Vienna Cricket and Football Club. In this cup competition all clubs of the Austro-Hungarian Empire that normally would not meet could take part, though actually almost only clubs from the Empire's three major cities Vienna, Budapest and Prague participated. The Challenge Cup was carried out until the year 1911 and is today seen as the predecessor to the Mitropa Cup and consequently the European Cup and Champions League. The last winner of the cup was Vienna Sports Club, one of the oldest and most traditional football clubs of Austria where the cup still remains.

The idea of a European cup competition was shaped after World War I which brought the defeat and collapse of the Austro-Hungarian Empire. The centre of this idea were the Central European countries that, at this time, were still leading in continental football. In the early 1920s they introduced professional leagues, the first continental countries to do so. Austria started in 1924, followed by Hungary in 1925 and Czechoslovakia in 1926. In order to strengthen the dominance of these countries in European football and to financially support the professional clubs, the introduction of the Mitropa Cup was decided at a meeting in Venice on July 17, following the initiative of the head of the Austrian Football Association (ÖFB), Hugo Meisl[1][2][3]. Moreover, the creation of a European Cup for national teams - that unlike the Challenge Cup and the Mitropa Cup would not be annual - was also part of the agreement. The first matches were played on August 14 of that year. The competition was between the top professional teams of Central Europe.

Initially two teams each from Austria, Hungary, Czechoslovakia and Yugoslavia entered, competing in a knock-out competition. The countries involved could either send their respective league winners and runners-up, or league winners and cup winners to take part. The first winners were the Czech side, AC Sparta Prague. In 1929 Italian teams replaced the Yugoslavian ones. The competition was expanded to four teams from each of the competing countries in 1934. Other countries were invited to participate - Switzerland in 1936, and Romania, Switzerland and Yugoslavia in 1937. Austria was withdrawn from the competition following the Anschluss in 1938. In 1939, prior to the start of WW II, the cup involved only eight teams (two each from Hungary, Czechoslovakia and Italy and one each from Romania and Yugoslavia). The level of the competing nations is clearly shown by Italy's two World Cup titles (1934 & 1938), Czechoslovakia's (1934) and Hungary's (1938) World Cup final, and Austria's (1934) and Yugoslavia's (1930) semi-finals. Out of the eleven different teams competing in the first three World Cups, five were part of the Mitropa Cup.

An edition in 1940 was started but abandoned due to World War II. Again, only eight teams competed - three each from Hungary and Yugoslavia and two from Romania. This edition was abandoned before the final match. Hungarian Ferencváros and Romanian Rapid (which had won on lots after three draws) qualified for the final, but did not meet because the northern part of Transylvania (lost shortly after World War I) was ceded back to Hungary from Romania. After World War II, the cup was resumed in 1951 initially as Zentropa Cup. Later editions, again under the Mitropa Cup label, lost much of its status because of the introduction of other European club competitions and faced an ongoing decline. By the 1980s it was competed for between the second division champions of the participating countries. It was last played for in 1992 and won by the Yugoslav side, Borac Banja Luka in front of fewer than a thousand spectators.