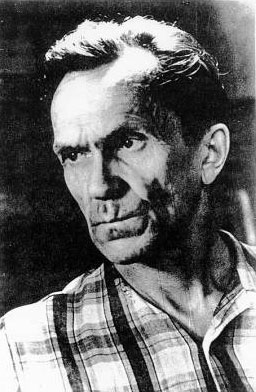 Varlam Shalamov was born in , to a family of an orthodox and a teacher. In 1914, he entered the academic gymnasium of St. Alexander's and graduated in 1923. In 1926, after having worked for 2 years, he was accepted at , department of . While studying there, he joined a -leaning group and on , was arrested and sentenced to three years of hard labor in the town of , convicted of distributing the "Letters to the Party Congress" known as , which, in part, criticized , and of participating in a demonstration marking the tenth anniversary of the Soviet revolution with the slogan, "Down with Stalin." He was released in 1931 and worked in the town of Berezniki in construction until his return to Moscow in 1932.

Back in Moscow, Shalamov worked as a , and saw some of his essays and articles, including his first short story (in 1936) "The three deaths of Doctor Austino."

At the outset of the , on , Shalamov was arrested again for "counter-revolutionary Trotskyist activities" and sent to , also known as "the land of white death", for five years. He was already in jail awaiting sentencing when one of his short stories was published in the literary journal "Literary Contemporary." In 1943 he was handed another term, this time for 10 years, for anti-Soviet agitation: the crime was calling Ivan Bunin a "classic Russian writer."

The conditions he endured were extreme, first in gold mining operations, and then in coal mining, during which time he also contracted typhus. He was repeatedly sent to punishment zones, both for his political "crimes" and for his attempt to escape.

In 1946, while a "dohodyaga" (emaciated and devitalized), his life was saved by a doctor-inmate A.I. Pantyukhov, who risked his own life to get Shalamov a place as a camp hospital attendant. The new "career" allowed Shalamov to survive and to write poetry.

In 1951 Shalamov was released from the camp, and continued working as a medical assistant for the forced labor camps while still writing. In 1952 he sent his poetry to , who praised Shalamov's work. After his release from the camps, he was faced with the dissolution of his former family, including a grown daughter who now refused to recognize her father.

Shalamov was allowed to leave in November 1953 following the death of Stalin in March of that year, and was permitted to go to the village of Turkmen in Kalinin , near Moscow, where he worked as a supply agent.

After the death of Stalin the enormous numbers of "zeks" (from the Russian abbreviation z/k for "zakliuchonnyi", an inmate) were being released and rehabilitated, many posthumously. Shalamov was allowed to return to Moscow after having been officially rehabilitated in 1956. In 1957, Shalamov became a correspondent for the literary journal "Moskva," and his poetry began to be published. His health, however, had been broken by his years in the camps, and he received an invalid's pension.

Shalamov proceeded to publish poetry and essays in the major Soviet literary magazines, while writing his , "". He was acquainted with , and . The manuscripts of "The Kolyma Tales" were smuggled abroad and distributed via "". The translations were published in the West in 1966. The complete Russian-language edition was published in London in 1978, and reprinted thereafter both in Russian and in translation. "The Kolyma Tales" is considered to be one of the great Russian collections of short stories of the twentieth century. [. "The Dreams of Others". In These Times. May 18, 2007. [http://www.inthesetimes.com/article/3183/the_dreams_of_others/] ]

One of his Kolyma short stories, "The Final Battle of Major Pugachoff" was made into a film in 2005.

In addition to his greatest work, "The Kolyma Tales," he also wrote a series of autobiographical essays that vividly bring to life Vologda and his life before prison, and his early youth.

Excerpts from the tale about Pugachov and his men can be found at:

The Western publishers always disclaimed that Shalamov's stories were being published without the author's knowledge or consent. Surprisingly, in 1972 Shalamov retracted the "Tales", most likely being forced to do so by the regime.Fact|date=July 2007 As his health deteriorated, he spent the last three years of his life in a house for elderly and disabled literary workers in . Shalamov died of poor health on January 17, 1982 and was interred at , .

The book was finally published on Russian soil in 1987, as a result of 's policy. Selections from "The Kolyma Tales" are now mandatory reading for high school children in the Russian Federation.cn|date=October 2007