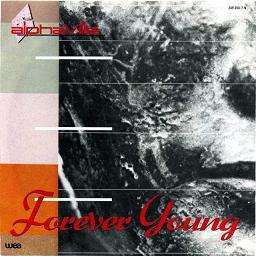 "Forever Young" is the title track from German rock/ group Alphaville's 1984 debut album. Though it was not the group's highest-charting European hit and failed to reach the American Top 40 despite three separate U.S. single releases, "Forever Young" became something of a pop standard and has been covered by numerous artists since its 1984 debut.

Originally released by Alphaville as a single in 1984, "Forever Young" was available in both its original mix and also in a dance version titled the "Special Extended Mix." Over the years the band has released several remixes and demo versions of the song.

The song's shows the band performing in one of the halls at in , . A number of ragged people ranging from children to the elderly awake to observe the band, then walk through a diamond-shaped glowing portal.

"Forever Young" has become something of a pop culture standard. It has been performed by numerous musical groups and in different versions and has appeared in television series, movies, and advertisements. The song plays during scenes in the television series "", "" (episode 103: "Underage Drinking: A National Concern"), the North American version of "Queer as Folk" (season 1, episode 18), and "One Tree Hill" (season 4, episode 16). It also plays in the movie "" and during the school dance scene of the 2004 film "". In 2006 and 2007 the song was used in advertisements for the n banks SEB in and , and in . It also appeared in -themed advertisements for s.

In Argentina it was also used in advertisements for Consolidar AFJP, a Pension Retirement Fund.

Just a year after the song's initial release, pop singer covered "Forever Young" on her album "Hold Me" and began a tradition of performing the song as an encore at her concerts. In 1996 the Canadian group Temperance released a cover version of the song which reached number 8 on the Canadian Dance Chart. "" contestant Sara Burnett performed "Forever Young" on the Swedish television show. Her performance qualified her for the show's top 10 and appears on the soundtrack "Det bästa från idol 2006" ("The best from Idol 2006"). Other artists to have covered "Forever Young" in the years since its original release include Tracy Huang, DJ Space C, David Monte Cristo, , (in the year 2000, with lyrics in German as "Für immer jung"), , Dune, B-Charme, BnH, , Fire & Ice, Interactive, Ella, , , and Atrocity. In 2001 Swedish group Ainbusk re-wrote the song in their native language as an existential titled "Förevigt nu". 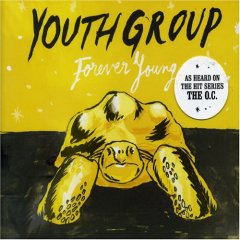 In 2005 n rock band were asked by the producers of the hit American television series "" to record a cover version of "Forever Young" for use in an episode of the show, after their single "Shadowland" had appeared in a previous episode and received a positive response. Their version of "Forever Young" not only played during an episode, but was used as theme music during Australian advertisements for the show's third season and was included on the soundtrack album "". The song became a hit in Australia, receiving radio play on rock station and soon being picked up by other stations. A single released in the country debuted at #2 on the ARIA charts, was ranked #1 in digital downloads, and was certified gold in sales. [cite web
last =
first =
authorlink =
coauthors =
title =Casino Twilight Dogs
work = website
publisher =
date =2006
url =http://www.epitaph.com/artists/album/486
format =
doi =
accessdate =2007-07-02 ] The song was included on the band's album "" released internationally later that year. A music video was released consisting of footage from the early-1970s Australian youth television program "GTK", showing Australia's first skateboarding contest being held at the factory in in 1975. The song is played throughout a 2007 Ad for Tourism New Zealand's "youngest country on earth" campaign, although this version was recorded by a New Zealand band Pluto.