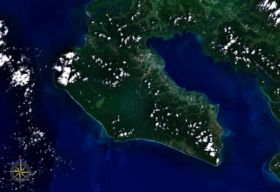 One of the most biologically intense places on earth, the Osa Peninsula is home to at least half of all species living in Costa Rica. The main town on the peninsula is Puerto Jimenez, which has its own airport and provides access to Corcovado National Park as well as the coastal villages of Cabo Matapalo and Carate.[1]

The peninsula is the setting for the autobiographical book "Oro" by Cyzia Zÿke (1985).