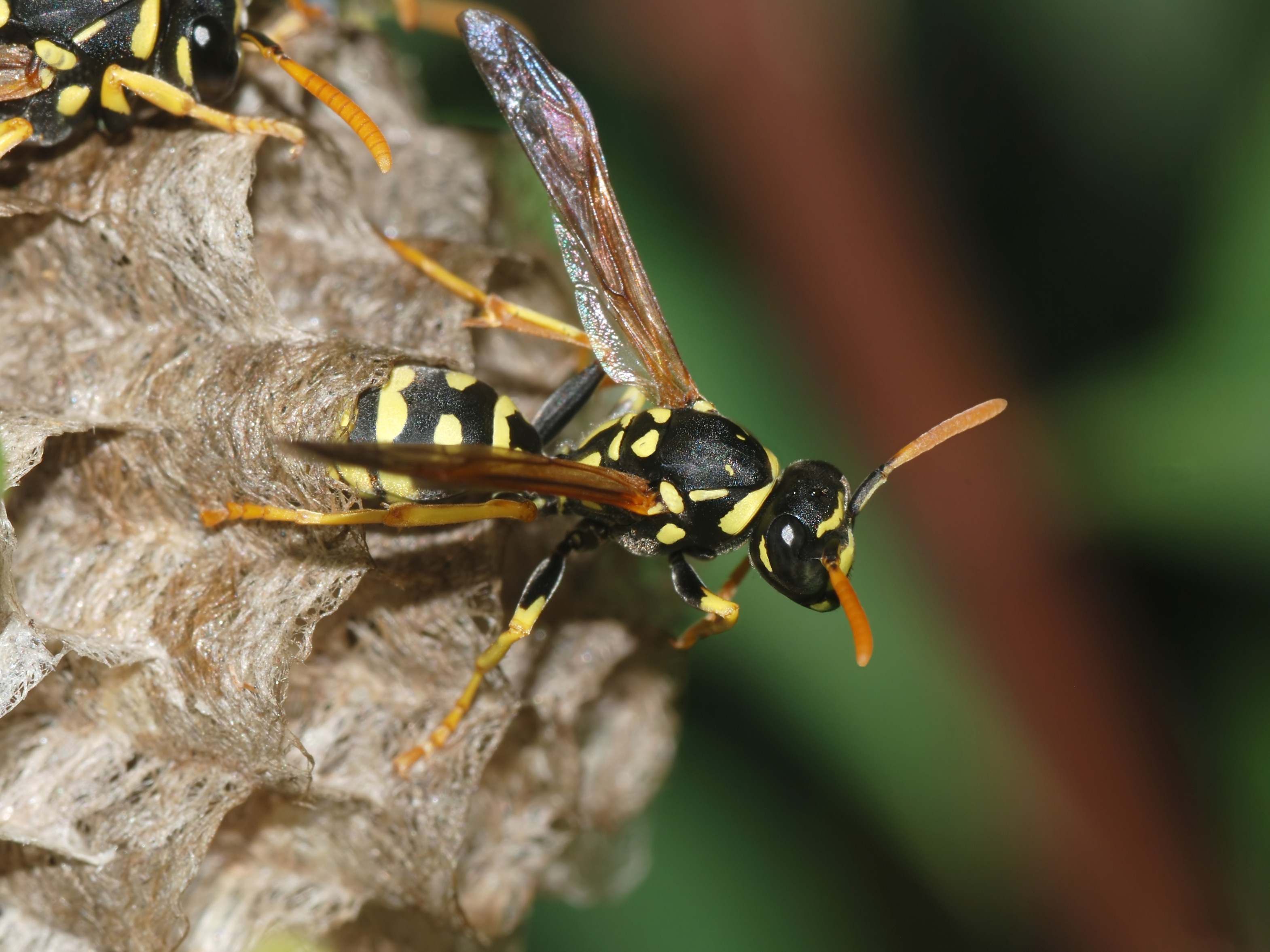 Wasps of the cosmopolitan genus "Polistes" (the only genus in the tribe Polistini) are the most familiar of the polistine wasps, and are the most common type of . It is also the single largest genus within the family , with over 300 recognized species and subspecies. Their innate preferences for nest-building sites leads them to commonly build nests on human habitation, where they can be very unwelcome; although generally non-aggressive, they can be provoked into defending their nests. All species are predatory, and they may consume large numbers of caterpillars, in which respect they are generally considered quite beneficial. The European paper wasp, "", was introduced into the US about and has quickly spread throughout most of the country, in most cases replacing native species within a couple of years. This species is very commonly mistaken for a , as it is black strongly marked with yellow, and quite different from the native North American species of "Polistes". Polistes can be identified by their characteristic flight; their long legs dangle below their body, which is also more slender than a yellowjacket. [ [http://www.ebop.govt.nz/land/media/pdf/Fact_Sheet_PA03.pdf Pest Animal Control] environment report. Retrieved 7 January 2007]

The founding stage begins in the spring when a solitary female (the "foundress") or a small group of related females initiates the construction of a nest. The wasps begin by fashioning a petiole, a short stalk which will connect the new nest to a substrate (often the eave of a house or outbuilding), and building a single brood cell at the end of it. Further cells are added laterally in a hexagonal pattern, each cell surrounded by six others. Although nests can achieve impressive sizes, they almost always maintain a basic shape: petiolated (), single-combed, unprotected, and open ().

Eggs are laid by the foundress directly into the brood cells and are guarded by the foundress and the assisting females (if present). After the first larvae hatch, the foundress feeds them via progressive provisioning, bringing softened caterpillar flesh to the larvae multiple times throughout their development (as opposed to the one-time provisioning seen in some other hymenopteran groups). This first seasonal brood of new paper wasps is exclusively female and destined to a subordinate worker position inside the nest; they do not found their own nests and instead assist their mother in the care and maintenance of future sisters.

It is worth noting that some foundress wasps do not build their own nests, but rather attempt to usurp that of another female. These usurpation attempts may or may not be successful but almost always result in impressive displays of aggression and violence. Females may also adopt a more peaceful alternative reproduction strategy by joining the nest of a close relative (usually a sister) and working as assisting females (see above). In the latter case, evidence shows that such co-founding females are generally, but not exclusively, close relatives.

The worker phase usually begins in the early summer, roughly two months after colony initiation, with the emergence of the first workers. These new females take up most of the colony's work duties, foraging, caring for brood, and maintaining the structure of the nest. Around this time, those females who assisted in nest foundation (if present) are driven from the nest by aggressive behavior on the part of the foundress, and leave either to start their own late-season nest or usurp another's.

Once male reproductives emerge and both males and females disperse from the natal nest for mating flights, the so-called intermediate phase begins. Brood care and foraging behavior decline and worker numbers drop as dying individuals are no longer replaced by new ones. Intracolonial agression increases and the social cohesion of the nest declines. In temperate "Polistes" species, individuals (almost exclusively inseminated females) gather in groups of up to fifty individuals and seek a sheltered location (called a ) in which to over-winter.

Morphologically, there is little difference between the foundress and subordinate reproductive members of the colony. However, several studies have shown that behavioral differentiation occurs among females both between and within generations. This has been best-studied in "P. dominula".

of paper wasps huddling together in early winter] "Polistes" discriminate colony mates using an acquired (i.e. learned) cue, absorbing hydrocarbons from the natal nest at eclosion. [cite journal | quotes=no|title=Kin recognition pheromones in social wasps: combining chemical and behavioural evidence|author=Gamboa G. J., Grudzien T.A., Espelie K.E. & Bura E.A|journal=Animal Behaviour|volume=51|pages=625–629|issue=1996|doi=10.1006/anbe.1996.0067|year=1996] This cuticular hydrocarbon "signature" is derived both from the plant material and the foundress-applied substances from which the nest is made. Studies of "" have looked into the molecular basis of the recognition "" used by the wasps, and indicate that at least some of the recognizable labels have the same chemical constituents as the adult cuticular hydrocarbons. Dominant individuals of "P. dominulus" have differing cuticular profile to workers, [cite journal | quotes=no|title=Cuticular hydrocarbons, social organisation and ovarian development in a polistine wasp: "Polistes dominulus"|author=Bonavita-Cougourdan A., Theraulaz G., Bagneres A.G., Roux M., Pratte M., Provost E., Clement J.L|journal=Comp. Biochem. Physiol. B Biochem. Mol. Biol|volume=100|pages=667–680|year=1991|doi=10.1016/0305-0491(91)90272-F] and the frequent observations of the dominant female stroking its across the nest surface, combined with its staying on the nest for longer times than subordinates, suggests that the dominant individual may contribute more to the nest odor.

A study of "P. carolina" showed that females do not preferentially feed their own progeny (as larvae), [cite journal | quotes=no|title=Absence of within-colony kin discrimination: foundresses of the social wasp, "Polistes carolina", do not prefer their own larvae|author=Strassman J. E., Seppa P. & Queller D.C|journal=Naturwissenschaften|volume=87|pages=266–269|year=2000 | doi=10.1007/s001140050718] so it may be the case that nest odour only serves as a likely indicator of relatedness, rather than a specific label of kinship.

Further to this recognition of nest-mates, a study on "" illustrated how foundresses discriminate between 'alien' eggs and their own, via differential oophagy. [cite journal | quotes=no|title=Opportunistic discrimination of alien eggs by social wasps ("Polistes biglumis", Hymenoptera Vespidae): a defence against social parasitism?|author=Lorenzi M. C. & Filippone F|journal=Behav. Ecol. Sociobiol|volume=48|pages=402–406|year=2000 | doi=10.1007/s002650000251] Interestingly, the discrimination focused upon eggs destined to be reproductives, with 'alien' worker destined eggs allowed to remain on the nest. The authors speculated that the benefits of allowing worker destined eggs to remain (and so hatch to become workers which will then aid the colony) outweigh the costs of initially provisioning the resultant larvae.

The mechanism of differentiation was not elucidated, but was thought to be based upon differences in cuticular hydrocarbon odor. Whether the discriminatory oophagy was a result of decreased tolerance of alien odors during the later, reproductive phase of the colony cycle, or an actual discrimination between worker and reproductive destined eggs, remains to be supported with good evidence.

Along with the German and s, the Asian and Australian paper wasps ("" and "P. humilis") are considered pests in . Arriving in 1979 [ [http://www.biosecurity.govt.nz/pest-and-disease-response/pests-and-diseases-watchlist/asian-paper-wasp Asian Paper Wasp | Biosecurity New Zealand] Retrieved 7 January 2007] , the Asian paper wasp has established itself on both the North and northern South Island. Because it competes with native species (such as the ) for insects, nectar and honeydew (Clapperton, 1999; Kleinpaste, 2000) [Quoted in [http://www.nzes.org.nz/nzje/new_issues/NZJEcol28_2_279.pdf Asian Paper Wasp Control paper] ] , it is a hindrance to conservation efforts.