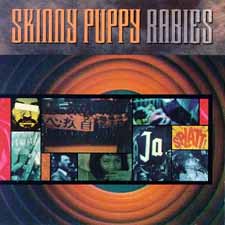 
"Rabies" is a 1989 album by . It was released on CD, cassette, and LP by Nettwerk Records in Canada, licensed for release on the same formats to in the United States, and released on CD only by Nettwerk in Europe. In 1993 the CD edition was reissued by Nettwerk to correct mastering errors in the original release.

All songs by Ogre/Key/Goettel. "Amputate" and "Spahn Dirge" are CD-only bonus tracks. Times listed are for the remastered CD.

The original CD release on Nettwerk (and the licensed version on Capitol) was mistakenly mastered with Dolby B noise reduction, which resulted in a muffled sound. In 1993, at the insistence of Key, the album was digitally remastered and re-released on Nettwerk. Besides the dramatically improved sound quality, the remastered version can be distinguished by the position of the track marker between "Choralone" and "Amputate" -- in the original release, at the end of "Choralone" there was the sound of a thunderclap. In the remastered version, this sound is at the beginning of "Amputate" instead.

Only one promotional video was produced for "Rabies". The "Worlock" video was mainly a rhythmically-edited string of horror movie clips and well as clips and outtakes from the band's earlier video, "Stairs and Flowers" (from the album ""). The video, which opens with an old-school type "Rated X" graphic, was intended to be a critique of the concept of censorship in America. Many of the movie clips featured in the video were from films directed by , a European horror director, who has a reputation of being "the most censored film director" in the world because his films are routinely heavily edited by US distributors to remove gore and violence so as to gain an "R-Rating" from the . For their video, Skinny Puppy included footage, deleted from the US versions of said films, from the following Argento films: "", "", "Tenebrae", "", "Phenomena", and "Opera". Other films included in the video include: "", "", "", "", "", "", "From Beyond", "Death Warmed Up", and "".

Due to the graphic violence of the horror film clips used in the video, "Worlock" was banned by . In 1992, Skinny Puppy released a compilation of their music videos, but "Worlock" was noticeably omitted. According to Nettwerk, the video was omitted partially due to copyright problems and also because of fear that the video would be banned by other countries that might find the video's content obscene. However, in recent years the video has been widely bootlegged among fans, thanks to the advent of the .

"Backing" videos for "Tin Omen" and "Choralone" were produced for the "Too Dark Park" tour in 1990, and have also been spread on the Internet.

On the song Rodent from the album Rabies the electric guitar kicks in at exactly 4 minutes and 20 seconds (see ).

"Rabies" is significant in Skinny Puppy's history for a number of reasons; not as much for the music, but for the events in and out of the studio involving the band members. Most of their previous albums had been mixed and produced by the group's "fourth member" Dave "The Rave" Ogilvie. For "Rabies", lead singer/songwriter Nivek Ogre brought in friend and Ministry frontman, Al "Alien" Jourgensen. Jourgensen and Ogre had toured together with Ministry (Ogre can be seen and heard on the "In Case You Didn't Feel Like Showing Up" video and CD). The other two members of Skinny Puppy, drummer/programmer cEvin Key and keyboardist/programmer Dwayne Goettel did not approve of Jourgensen's takeover, creating friction between the band members.

Key, upon being asked what his favorite "Dwayne moment" was, selected the strings on "Worlock". He came home to find the strings recorded on a tape and constructed the rest of the song from it. Ogre has also stated the opinion that Worlock "rivals Killing Game" as one of their best songs. The song has been played on every single tour after its conception. A Roland Harmonizer was used to create the -effect during the chorus. Samples of the song "Helter Skelter" by are mixed with singing the song within "Worlock".