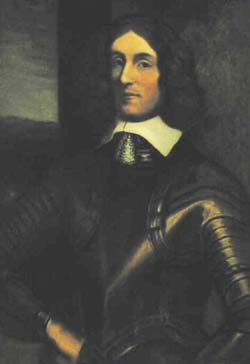 Haynes was likely born at , , England, the son of John Haynes and the former Mary Michel, the family an gentry or 'visitation family' who had lived at , and at Great Haddam. [ [http://books.google.com/books?id=p_yzpuWi4sgC&pg=RA1-PA393&dq=%22john+haynes%22+connecticut&ei=UhbwSPeqC46KswOAj5XJCw&sig=ACfU3U1lTTgdaydsD2KoBSPemjbKelprPg Plantagenet Ancestry, Douglas Richardson, Kimball G. Everingham, David Faris, Genealogical Publishing Company, 2004] ] By about 1616 Haynes was living at Gurney's Manor, , Norfolk, where he was apparently lord of the manor and where he married Mary Thorneton. In 1627 his wife Mary died and was buried at St. Andrews Church in Hingham. A man of some wealth, Haynes also owned estates at and at near Hingham. Tax assessments of 1621 show Haynes to have been a rich man: he was receiving £500 a year in income.

Subsequently Haynes left Norfolk County and returned to , Essex, a hotbed of the movement. Shortly afterwards he sold his estates at great loss and joined the Puritan migration to the , settling first at Newtown (Cambridge) in July 1633. As a prominent member of the colony, Haynes was selected to serve one term as governor in 1635. Roger Williams was banished under his administration, though by later accounts, Haynes grew to regret it.

Due to growing religious strife and food shortages in the colony, Haynes made the decision to take his family and set off with to form a separate colony that would be known as . After the ratification of the Fundamental Orders of the colony in 1638/9, Haynes was elected as the first governor of the . He was apparently popular with the people of the colony, and was either deputy governor or governor for the rest of his life. He died in January of 1653 or 1654, in Hartford.

His notable achievements include a part in the creation of the .

Haynes was married to Mary Thornton, with whom he had six children. Several years after her death, he married Mabel Harlakenden, and they had five more children. One of John Haynes' children was General , a soldier in the army of .