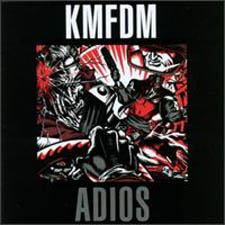 "Adios", the eleventh studio album released by , was originally conceived as the group's parting shot to its longtime record label, , but it ended up also signaling the break-up of KMFDM itself, at least for a time. Recorded in this was the last album to feature and , who both went on to form . Following the break-up, founding member created the band , before reforming KMFDM in 2002 without Esch or Schulz.

For a short period of time in 1999, any copy of "Adios" purchased through the official online KMFDM store was signed by Konietzko and Tim Skold.

The album was released on April 20, 1999, on the same date the took place. , the two perpretators of the massacre, were both avid KMFDM fans. Eric Harris noted the irony of the album's title and release date in his journal.

A digitally remastered reissue of "Adios" was released on May 8, 2007, along with "Symbols".