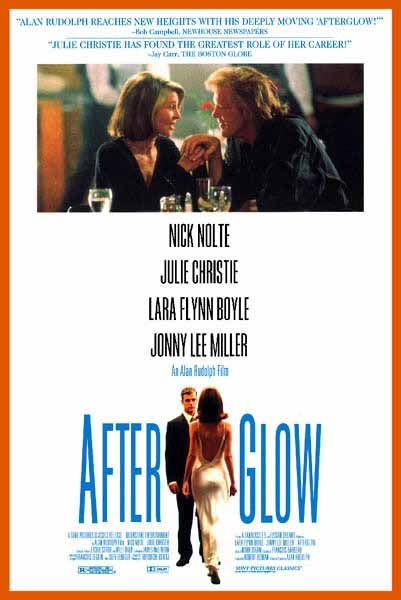 "Afterglow" is a 1997 starring and . directed and wrote the script for the movie. It was produced by and filmed in Montreal.

Christie's portrayal earned her a nomination for an for .

The film had a in the US due to sexuality and some language.

Repair contractor "Lucky" Mann and his former actress wife Phyllis are an unhappily married couple living in , . Their teenage daughter has run away. He arrives at the home of sexually frustrated housewife Marianne whose relationship is similarly strained with her husband Jeffrey. Lucky and Marianne begin an affair.

Phyllis searches for her daughter in the streets of Montreal. She meets Jeffrey and agrees to spend the weekend with him. The course is set for a showdown amongst all four.

Julie Christie was nominated for Best Actress in a Lead Role in the 1997 Academy Awards for her role. She won best actress at the . The cast won the jury award for best ensemble performance at the , and Nick Nolte won the best actor award at the same festival. The film won the Audience award at the .