Lake Shore Drive (colloquially referred to as LSD or simply Lake Shore or The Drive) is a mostly -standard running parallel with and alongside the shoreline of through , , USA. Except for the portion north of Lawrence Avenue, Lake Shore Drive is designated as part of .

The downtown part originally opened as Drive in 1937 (and was also called Field Boulevard); it was renamed Lake Shore Drive in 1946.

Lake Shore Drive's origins date back to , who coerced the city to build the street adjacent to his lakefront property to enhance its value. Palmer built his "castle" at 1350 N. Lake Shore Drive in 1882. The drive was originally intended for leisurely strolls for the wealthy in their carriages, but as the auto age dawned it took on a different role completely.

In 1937, the double-decker over the opened, along with s over s and other industrial areas connecting to both ends of it. The lower level was intended for a railroad connection, but it was never used until LSD was rebuilt in 1986. At the time the bridge was built, it was the longest and widest in the world. [http://memory.loc.gov/pnp/habshaer/il/il0600/il0619/data/003.gif] [http://memory.loc.gov/pnp/habshaer/il/il0600/il0619/data/005.gif]

North of the river, LSD intersected Ohio Street at grade, and then passed over Grand Avenue and Illinois Street on its way to the bridge. South of the river, LSD came from the south on its current alignment, but continued straight at the curve north of Monroe Street, rising onto a viaduct. It intersected Randolph Street at grade and then continued north above the 's yard. At the river, it made a sharp turn to the right, and another sharp turn to the left onto the bridge. These curves (actually a pair of 90-degree turns) were known locally as the "S-Curve" or the "S-Turn", and were a bottleneck to drivers for many years until the 1980s reconstruction.

Lake Shore Drive was extended from Irving Park Road north to Foster Avenue (5200n) in the 1930s where it terminated until the 1950s when it was extended - first briefly to Bryn Mawr (5600n) & then in 1957 to its present terminus at Hollywood Avenue (5700n). The landfill used for the 1930s extension was mostly dirt, but the 1950s extension included rubble and debris from the destruction of homes razed for the construction of the Congress Expressway (now the ). Portions of the drive between Irving Park Road and Foster Avenue still contain the original concrete from the 1930s, but this is scheduled for replacement in the near future.Prior to the extension to Hollywood, traffic was funneled onto Foster, then north onto Sheridan Road, which still remains a wide 4-lane street to this day, though most traffic doesn't rejoin Sheridan until LSD ends at Hollywood Avenue now. Sheridan Road south of Foster narrows to 2 lanes of traffic with street parking on each side as well.

When was extended east to LSD in the 1970s, its upper level ended at LSD at the west curve (the lower level dead-ended underneath). A new development at the northeast corner of the Randolph Street intersection resulted in an extension of Randolph across LSD.

Construction began in 1982 on a realignment of LSD south of the river (along with a reconstruction north of the river). A whole new alignment was built, greatly smoothing the S-curve (later named, in a fortuitous coincidence, for founder George S. Halas). The northbound side opened in October 1985, and the southbound side opened in November 1986. [http://www.chipublib.org/004chicago/timeline/scurve.html] A new lower level was built, using the lower level of the bridge, and providing access to the new Wacker Drive and the roads on the north side of the river.

The old road south of Randolph became a ; the east-west part was reconstructed as part of (which was being rebuilt at the time). The rest, between Randolph and Wacker, was kept for several years as Field Boulevard, but was demolished, with only the southernmost part remaining in 1994, and even that is now gone. Only some old street lighting, sidewalks & fire hydrants remain, marking the former route. All of which look oddly out of place in the park setting. Current plans are for new upper level streets in the area as part of the development.

On , , some 15,000 anti-war protesters marched along Lake Shore Drive the day after the United States , stopping all traffic for several hours. The spontaneous direct action occurred after the original protest route through downtown Chicago, as planned by the Chicago Coalition Against War & Racism, was blocked by law enforcement. Approximately 900 marchers were arrested and a City Council investigation was held before all charges were dropped.

Plans were made to extend Lake Shore Drive farther north through Rogers Park and into Evanston. Those plans were abandoned as a result of protests against cutting neighborhoods off from the lake. Specifically, Rogers Park and Edgewater voters rejected the extension in a in November 2004 [ [http://media.www.dailynorthwestern.com/media/storage/paper853/news/2004/11/04/Campus/Rogers.Park.Voters.Strike.Down.Lake.Shore.Drive.Extension.Plan-1915753.shtml B. Gilpatrick, "Rogers Park voters strike down Lake Shore Drive extension plan", The Daily Northwestern, Nov. 4, 2004] . Retrieved on .] . 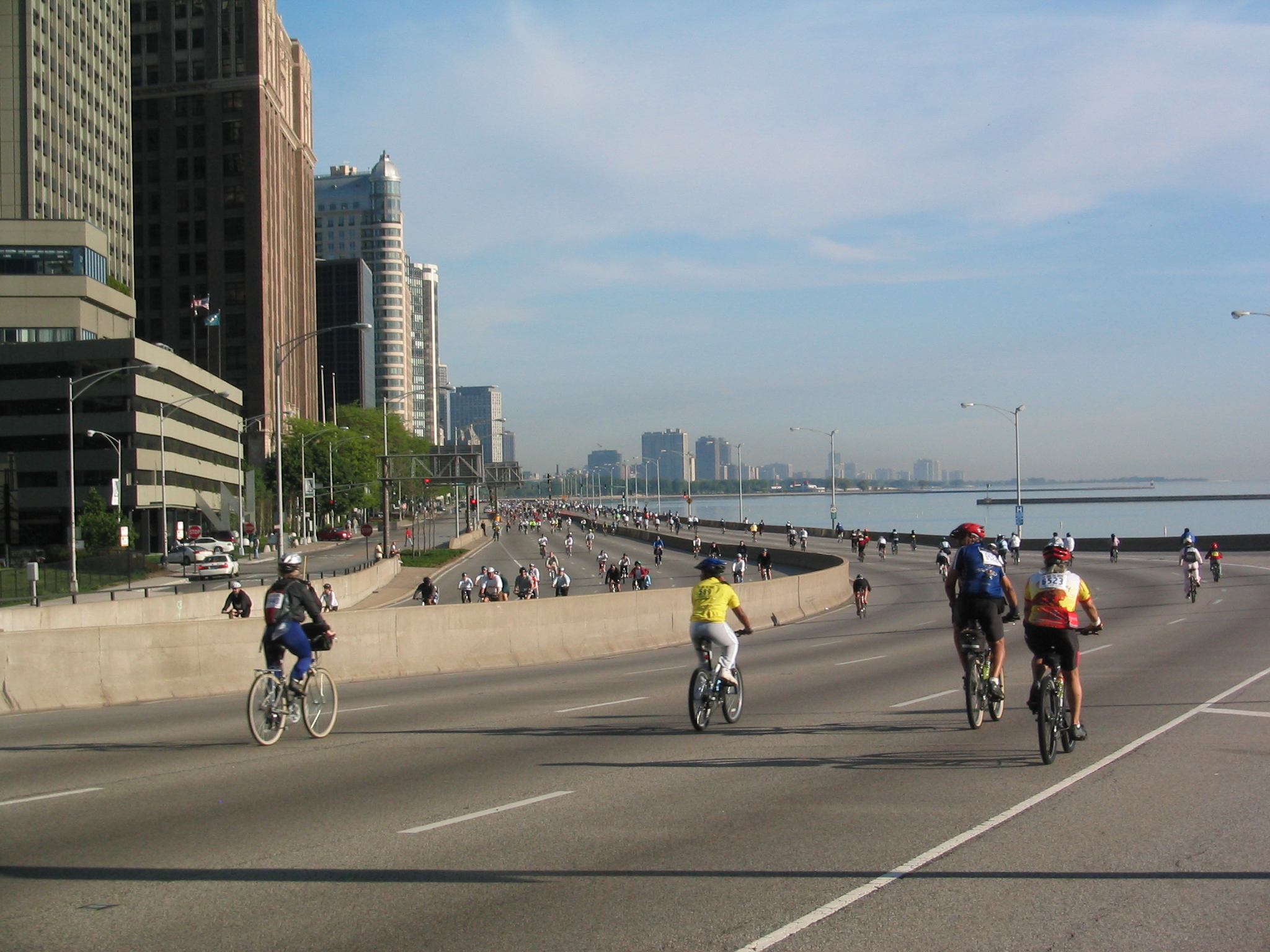 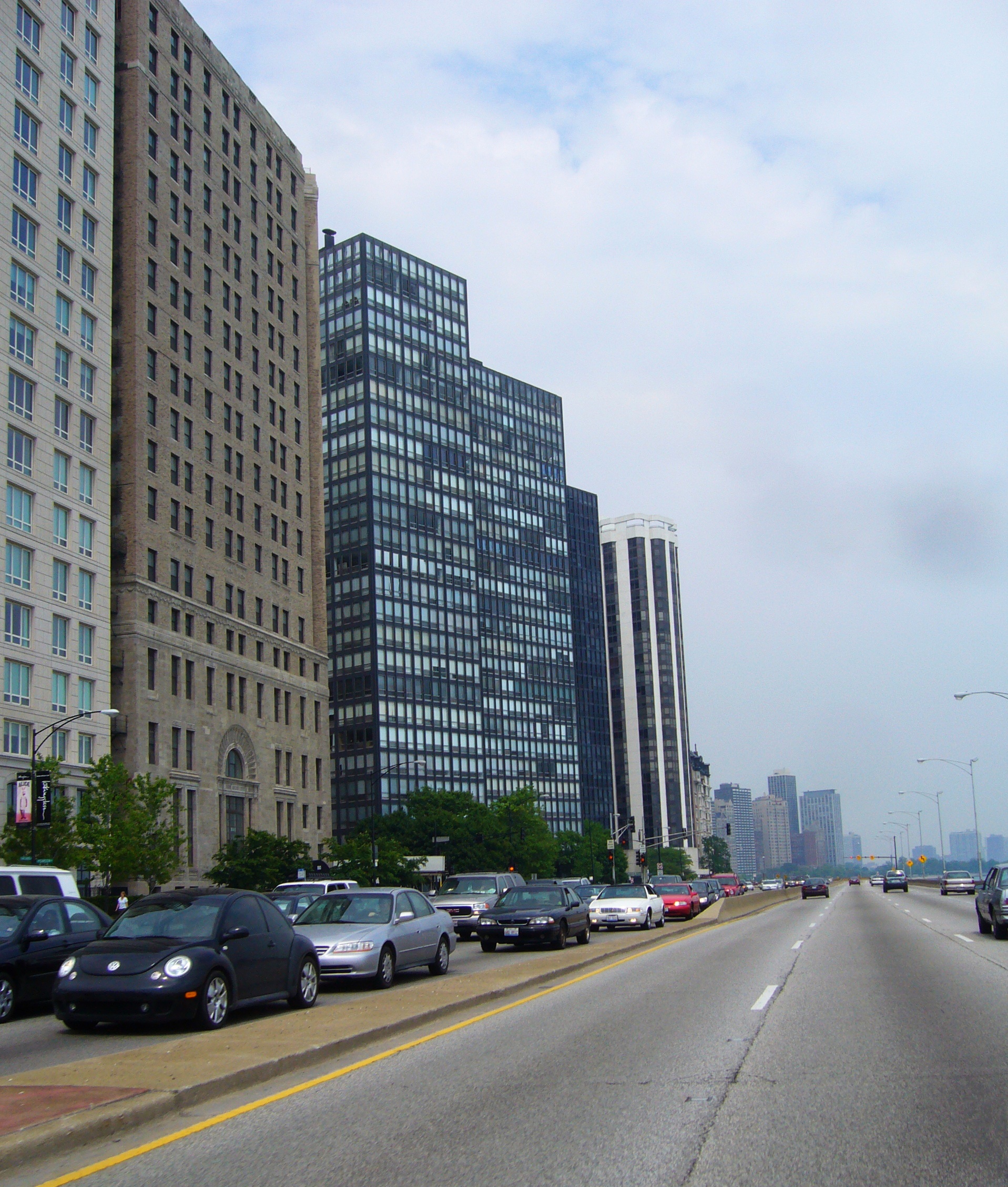 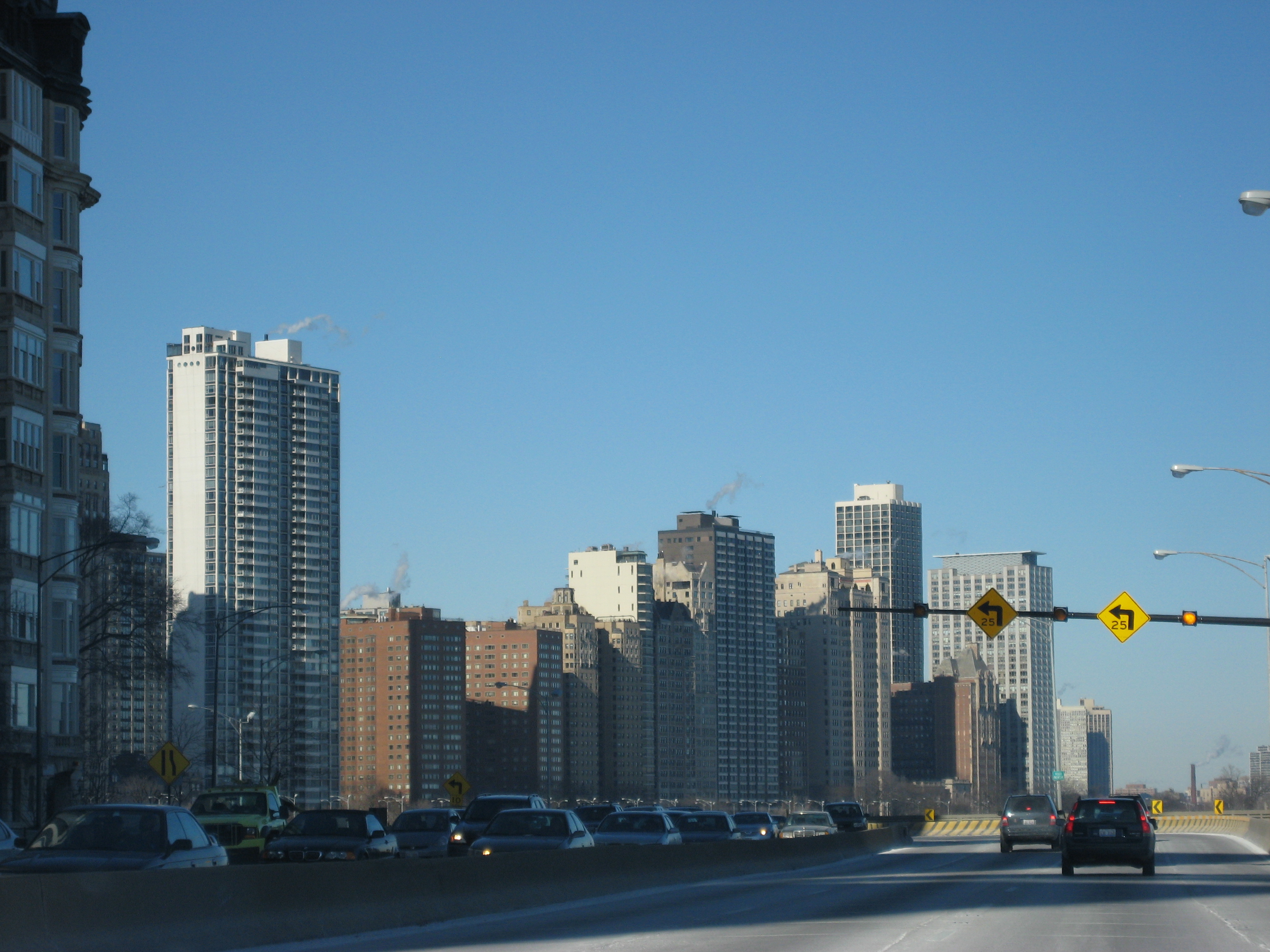 In the 20th century, the tiny neighborhoods near Lake Shore Drive came to be occupied by exclusive high-rise apartment, condominiums and co-op buildings. To the political columnist , Lake Shore Drive was goo-goo territory, a land occupied by Chicago's wealthy "good-government" types. Royko sometimes used Lake Shore Drive as a political moniker. Though he often agreed with the reformers, he looked upon them with the same cynical eye as his fictional Chicago everyman, .

Lake Shore Drive contains both an inner and an outer drive.

The original inner drive (or local) is used for slower local traffic and is connected to the street grid. The local drive runs from downtown in Streeterville to North Avenue (1600n), (becoming Cannon Drive). Then the inner drive reappears just south of Diversey Parkway (approx. 2700n), continuing north to Irving Park Road (4000n). The portion from Belmont (3200n) to just south of Irving Park (3900n) was previously named Sheridan Road (which can still be seen carved in stone in at least one vintage high-rise).

The outer drive (or express) with limited-access runs from the south side of the city, north to the terminus at Hollywood Avenue (5700n) in the Edgewater neighborhood.

Lake Shore Drive runs both north/south and east/west, like several other major streets in Chicago. East Lake Shore Drive in the Gold Coast neighborhood is one of the most prestigious addresses in the city partly due to its roughly 1-block long length.

Other streets in Chicago that run both north/south and east/west include , , and Hyde Park Blvd. The Lakefront Bike Trail, an 18 mile bike trails runs to the east of Lake Shore Drive for most of its length.

It is used as an exit road from Chicago Bears games, because it runs right next to Soldier Field.

The 1971 song "Lake Shore Drive" by is a reference to the road and an allusion to its initials, . Styx mentions the road in their 1979 song "Borrowed Time" as well as "Back to Chicago" from 1990. The road is also mentioned in the 2005 song "Drive Slow", and also in his verse in the Boost Mobile promotional single "Whole City Behind Us". The song "Lake Shore Drive" by is also about the famous road.

Because of the connection to drugs, it was believed that the US Post Office would not deliver mail to a Lake Shore Drive address if it were abbreviated LSD.Fact|date=February 2007 The Post Office announced in the early 1990s that this practice would be halted, and LSD was an accepted abbreviation.

The entire road is in Chicago, Cook County.