The context here is that the theoretical studies being undertaken, or the data analysis being done, involves a wider set of random variables but that attention is being limited to a reduced number of those variables. In many applications an analysis may start with a given collection of random variables, then first extend the set by defining new ones (such as the sum of the original random variables) and finally reduce the number by placing interest in the marginal distribution of a subset (such as the sum). Several different analyses may be done, each treating a different subset of variables as the marginal variables. 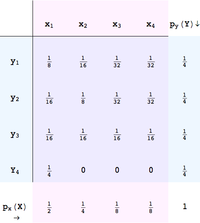 For discrete random variables, the marginal probability mass function can be written as Pr(X = x). This is

Similarly for continuous random variables, the marginal probability density function can be written as pX(x). This is

Realistically, H will be dependent on L. That is, P(H = hit) and P(H = not hit) will take different values depending on whether L is red, yellow or green. You are, for example, far more likely to be hit by a car if you try to cross while the lights for cross traffic are green than if they are red. In other words, for any given possible pair of values for H and L, you must feed them into the joint probability distribution of H and L to find the probability of that pair of events occurring together.

Here is a table showing the conditional probabilities of being hit, depending on the state of the lights. (Note that due to the dependence, only the columns in this table must add up to 1).

The marginal probability P(H=Hit) is the sum of the bottom row (above the totals row), as this is the probability of being hit when the lights are red OR yellow OR green. Similarly, the marginal probability that P(H=Not Hit) is the sum of the top row. It is important to interpret this result correctly. The chance of being hit by a car when you cross the road is obviously a lot less than 17.7%. However, what this figure is actually saying is that if you were to ignore the state of the traffic lights and cross the road no matter their color, you would have a 17.7% risk of being hit by a car. This seems more reasonable.

For multivariate distributions, formulae similar to those above apply with the symbols X and/or Y being interpreted as vectors. In particular, each summation or integration would be over all variables except those contained in X.