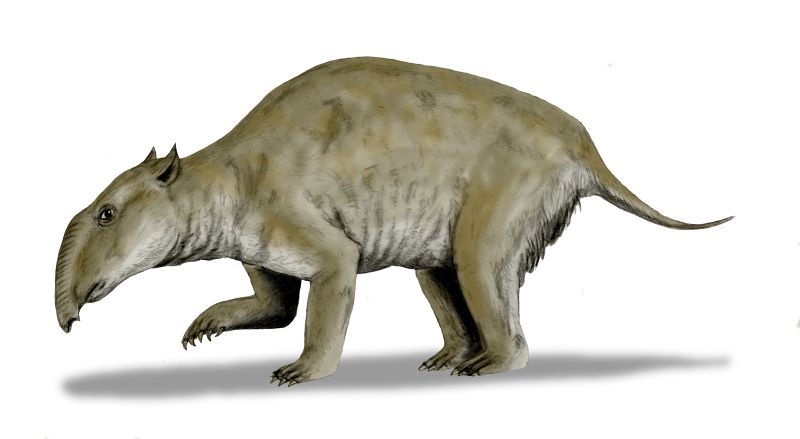 "Palorchestes azael" ("ancient leaper") is an extinct species of .

It was a 2'50 m (8 ft 4 in) long creature that resembled a , possessing a short (based on the appearance of its nasal bones). "Palorchestes" front legs bore large s, probably used to pull down leaves.

"Palorchestes azael" was a marsupial species that appeared during the , and went extinct about 40,000 years ago. This creature has been called the "marsupial tapir" because of its long nose. However, "Palorchestes" was not a tapir. The similarity in nose shape is an example of .

Fossilized remains of "Palorchestes azael" have been found at the Naracoorte Caves fossil site in .

The generic name was coined by Sir , who first found what he thought was the fragmentary jaw of a prehistoric kangaroo. It was not until more postcranial elements were found did anyone realize that "Palorchestes" was actually a diprodontid, and not a kangaroo. [Long, J., Archer, M., Flannery, T., and Hand, S. J. (2002) Prehistoric Mammals of Australia and New Guinea: One Hundred Million Years of Evolution. Kensington: University of New South Wales. (pg 100)]

*Barry Cox, Colin Harrison, R.J.G. Savage, and Brian Gardiner. (1999): The Simon & Schuster Encyclopedia of Dinosaurs and Prehistoric Creatures: A Visual Who's Who of Prehistoric Life. .