The Power of Love (Huey Lewis and the News song)

The Power of Love (Huey Lewis and the News song) 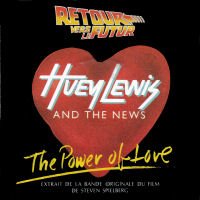 "The Power of Love" is the title of a 1985 single by written for and featured in the film "". It gave the band their first number-one hit on the U.S. and later peaked at #9 in the , while appearing on UK editions of the band's fourth studio album, "". The song was nominated for an at the .

The song appears early in "" as () skates to school, then when he and his band played the song for a auditions (which Lewis, himself, is judging), and later when Marty returns to his neighborhood. In the sequel, "", the 2015 version of Marty barely plays the song on his guitar just after being fired, but because his hand was damaged from his 1985 accident with a Rolls Royce, he cannot play the guitar well. It is hard to tell that he is playing "Power of Love." Finally, it can be briefly heard playing in the car where Needles and his buddies are driving when Needles challenges Marty to the fate-determining car race near the end of "".

The , featured in the bonus features of the "Back to the Future Part II" disc, shows the band playing in a nightclub, with showing up in the DeLorean, apparently after time-traveling, and a couple stealing it for a joy ride.

The track has recently been covered by UK guitar indie band . The cover has been included on the BBC Radio One compilation CD "". It was also covered by band on the 2005 compilation, "".

The popular Canadian teen drama "", which is known for naming each episode after an '80s hit song, named an episode after this song.

It appears in the singing video game called . It is also used in every episode of Sidescrollers on the gaming website . In addition, a cover of the song was used in the original version of the "" episode "Love 'Em and Leave 'Em".

The season 2 opener of the action/comedy series "Chuck" features both "" and "The Power of Love".