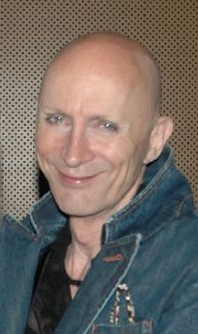 Richard Timothy Smith (born ), better known under his Richard O'Brien, is an English-born, New Zealand-raised , , and performer. He is perhaps best known for writing the cult musical "" and for his role in presenting the popular TV show "". In addition to writing "" O'Brien also starred in its 1975 film adaptation "" as the character Riff Raff. The stage show has been in almost continuous production since, and the cinematic version is one of the best known and most ardently followed s of all time.

O'Brien was born Richard Timothy Smith in , , . In 1942, O'Brien emigrated with his family to , , where his father had purchased a sheep farm. After learning how to ride horses, a skill which provided him with his break into the film industry as a stuntman in "", and developing a keen interest in and , he returned to in 1964. Upon launching his acting career he changed his name to O'Brien, his maternal grandmother's name, [ [http://www.imdb.com/name/nm0639782/bio Richard O'Brien (I) - Biography ] ] as there was already an actor named Richard Smith.

After taking a few classes, O'Brien joined several stage productions as an actor. In 1970 he went into the touring production of "Hair" for nine months, and spent another nine months in the London production. May 1972 saw the birth of his son Linus by Kimi Wong, and that summer he met director who cast him as an Apostle and Leper in the London production of "Jesus Christ Superstar." Sharman then cast O'Brien as Willie, the alien in his March 1973 production of Sam Shepard's "The Unseen Hand" at the Theatre Upstairs, and would help make O'Brien's draft of a gothic-themed, schlock-horror comic-book fantasy romp into a reality. Sharman suggested changing the working title from "They Came from Denton High", and "" opened at the Theatre Upstairs in June 1973. [Harding, James (1987). "The Rocky Horror Show Book." London: Sidgwick & Jackson. 22-23.]

O'Brien tried to repeat the success and cult status that "" gained, with a follow-up movie, 1981's "". Four other members of the original film-cast appeared with O'Brien in the new film, which continued the story of Brad and Janet, played by and . Over the years it has achieved minor cult status, mostly thanks to the Rocky Horror phenomenon. Fans of Rocky Horror were disappointed by the absence of both the Dr. Frank-N-Furter character, and , who played him. Curry had been offered the role of Farley Flavors, but turned it down over concerns about the required American accent. O'Brien wrote new songs for the film, which also features a rare film appearance by Australian actor , famous for his character .

In 1998 he released a music CD of the songs from "Disgracefully Yours" entitled "Absolute O'Brien."

He became the presenter of UK 's popular game show "" in 1990, specialising in sardonic put-downs and playing. The show's heyday was around 1991-1993. Richard left The Crystal Maze in 1993 after the fourth series; the show was then taken over by . It was regularly Channel 4's highest watched programme, mainly seen by children and young adults (particularly university students who made it into a cult show), reaching a peak of 7 million viewers for the 1993 Christmas special. The extent of both the shows and to a large extent O'Brien's success is shown by the fact that "The Crystal Maze" was named 'Greatest UK Game Show of All Time' in a 2006 poll by the UKGameshows.com website. Indeed, it never achieved the same degree of success under Tudor-Pole, and was discontinued within two years.

In other roles O'Brien has conceptualized and played the role of the Child Catcher in the production of "". He also occasionally does -style music and comedy performances on stages around the world, singing songs from "Rocky Horror" among others. In 1995, he performed a select number of shows as the devilish charmer, Mephistopheles Smith, in a musical/comedy show he wrote entitled "Disgracefully Yours", which was later given permission to be adapted into a musical, performed first by The Kansas City Fringe Fest in 2006, and more recently by Janus Theatre Company for the Edinburgh Fringe 2007, simply entitled "Mephistopheles Smith". In late 2005, he appeared (as the spirit of the mirror) in the pantomime version of "", which played at the . In the summer of 2006 he played the in the Queen's 80th birthday celebrations at .

Richard O'Brien will perform in "Thank-You for the Music", an 90 minute documentary for , directed by Martin Koch, who previously directed the musical "" [ [http://www.lilmcclarnon.net/index.php?pid=1 LilMcClarnon.net] News October 24, 2006 (Accessed October 26, 2006)] The documentary will include a remake of the mini musical "The Girl with the Golden Hair" which ABBA performed during their 1977 world tour and which was featured on "". The musical will be performed at the and feature Richard O'Brien, , and the Dynamos. [ [http://www.lilmcclarnon.net/index.php?pid=1 LilMcClarnon.net] News October 31, 2006 (Accessed November 1, 2006)]

He is also a patron of the Five Stars Scanner Appeal, [ [http://www.fivestarsappeal.co.uk Five Stars - Home ] ] which benefits the , UK. From 2001 until 2006 he hosted the annual Transfandango, [ [http://www.wayout-publishing.com/transfandango/index.htm Transfandango home page ] ] gala gathering of "Dearhearts and Trans 'n' Gentle People" to raise money for the hospital. This has now been superseded by 'Richard O'Brien's Halloween Party'.

He wrote a Rocky Horror sequel which ended up as "". A script for a rumored sequel entitled "Revenge of the Old Queen", has been circulated on the web and reproduced on various fansites, though officially denied as O'Brien's work by his representatives. While he has worked on a screenplay of that title, it was never publicly released, nor will a film ever be made. He has been working again on "The Stripper" (based on the book by ), a musical for which he wrote the lyrics.

In 2004, Hamilton City Council of New Zealand honoured O'Brien's contribution to the arts with a statue of Riff Raff, the character Richard played in "The Rocky Horror Show", on the site of the former Embassy Cinema. His love of horror and similar genres can be traced back to the countless afternoons he spent watching double feature horror/sci-fi films at the Embassy before he moved back to England.

In September 2007 he reprised his role as the Child Catcher for the final 2 weeks of "Chitty Chitty Bang Bang"'s 5 year UK run, and then played the role in its Singapore engagement for the month of November, extended to . Also in December, he visited Hamilton, New Zealand and presented "An Evening With Richard O'Brien", in conjunction with an independent NZ film group, planning to film a musical based on his early life, "The King's Stilettoes".

He is scheduled to host another television series slated for late night airing in the UK in the summer of 2008, "Richard O'Brien's Dead Strange".