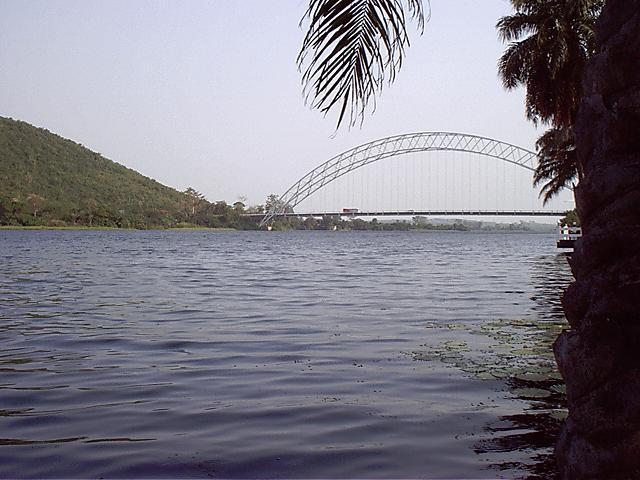 image_size = 300
image_caption = The Adome bridge crosses the Volta river south of the .
etymology =
country = Ghana
country1 =
state =
state1 =
region_type =
region =
region1 =
city =
city1 =
landmark =
landmark1 =
length =
length_note =
watershed = 407093
watershed_note = The Volta is a in western that drains into the . It is divided into the , the and the . The river gave its name to and then the before that country was renamed in .

in is the largest man-made lake in the world, extending from the in southeastern Ghana to the town of , 1500 km (938 miles) to the north. The lake generates electricity, provides inland transport, and is a potentially valuable resource for irrigation and fish farming.

The Portuguese purchased much of their gold from inhabitants of this region during the .

The river achieved its name because early Portuguese gold traders marked the river as their furthest point of exploration before turning around "Volta".

* [http://www.waterandnature.org/eatlas/html/af26.html Map of the Volta River basin at Water Resources eAtlas]
* [http://www.vra.com/ Volta River Authority, an agency of the government of Ghana]