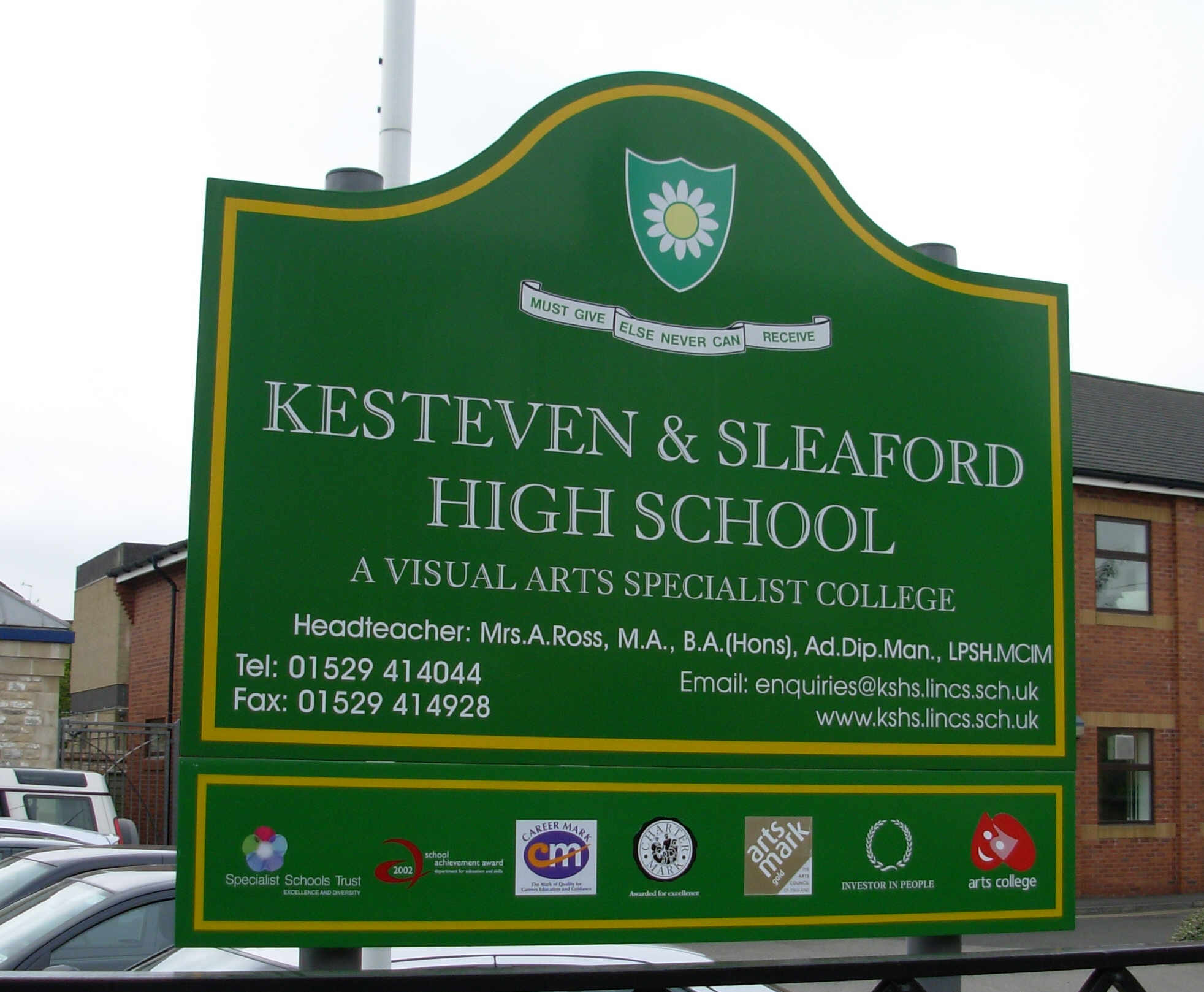 Kesteven and Sleaford High School (KSHS) is a for girls aged between eleven and eighteen, located on Jermyn Street in the small market town of in , close to Sleaford train station.

KSHS was founded in 1902 as the then independent Sleaford and Kesteven High School Ltd.

In 2007 KSHS was the only school selected by the to take part in a research programme into the value of educational technologies in schools, along with one school from the US and one from Australia.

KSHS occupies a fairly congested but attractive site between Sleaford's high street (known as Southgate) to the east and the site of the long-demolished twelfth-century to the west. The school is housed in a number of buildings, some old and some relatively modern. One of the old buildings is no. 62 Southgate, built about 1850 in the style by a local architect called Charles Kirk who was responsible for a number of Sleaford's most prominent nineteenth-century buildings. New buildings for the twenty-first century include a technology block, sports hall and drama studio, together with the Catermole Block housing the new purpose-built library. The school is in the process of installing an operational in a specially designed and decorated room in the Catermole Block.

The school has its own playing fields on-site.

Highly popular, and with demand for places outstripping supply, the school has pupils drawn from 200 square rural miles covering a large area of South Lincolnshire and as far as Newark in . KSHS offers an extremely supportive environment, with special provision for the talented and gifted as well as those with special needs, and as a result unauthorised absences are extremely low (0.1%). A number of the pupils and staff have connections to the since the school lies only a few miles from the at .

The sixth form is joint, shared with 's other schools: , and , a mixed non-selective school.

A number of the pupils are members of the (NAGTY), and represent the highest school membership for Lincolnshire.

Fieldwork and other activities

KSHS offers foreign trips for pupils studying Geography, History and Art. History pupils in Year 11 have the opportunity to study the and the on the annual journey to , and can also take part in the joint Geography and History trip to and . Some Geography students participated in a trip to in 2007.

History pupils are offered a variety of other trips within the UK. For example, Year 7 pupils visit , Year 8 pupils make a full-day visit to in , and Year 9 pupils visit the Centre at Laxton, near .

Geography pupils participate in field trips within the UK as well.

Art students are offered a visit to or . Those studying languages can take part in foreign exchange visits.

The school supports pupils participating in the at Bronze, Silver and Gold.

Amongst KSHS's results for 2007 were 67% of pupils achieving level 7 in Science, the highest level possible.

The report for 2007 declared that KSHS 'is an oustanding school which has made many improvements since the last inspection when it was judged to be good. The headteacher and her senior leadership team have developed exemplary systems to monitor the work of the school ... Parents are overwhelmingly positive ... Achievement is oustanding ... There is an outstanding curriculum ... The school provides an excellent level of care and guidance which results in outstanding personal development ... The school is exceptionally well led by the headteacher and her senior team.'

The headteacher is Mrs Alison Ross (appointed 1996), leading a staff of approximately 45 teachers of whom around three-quarters are female.