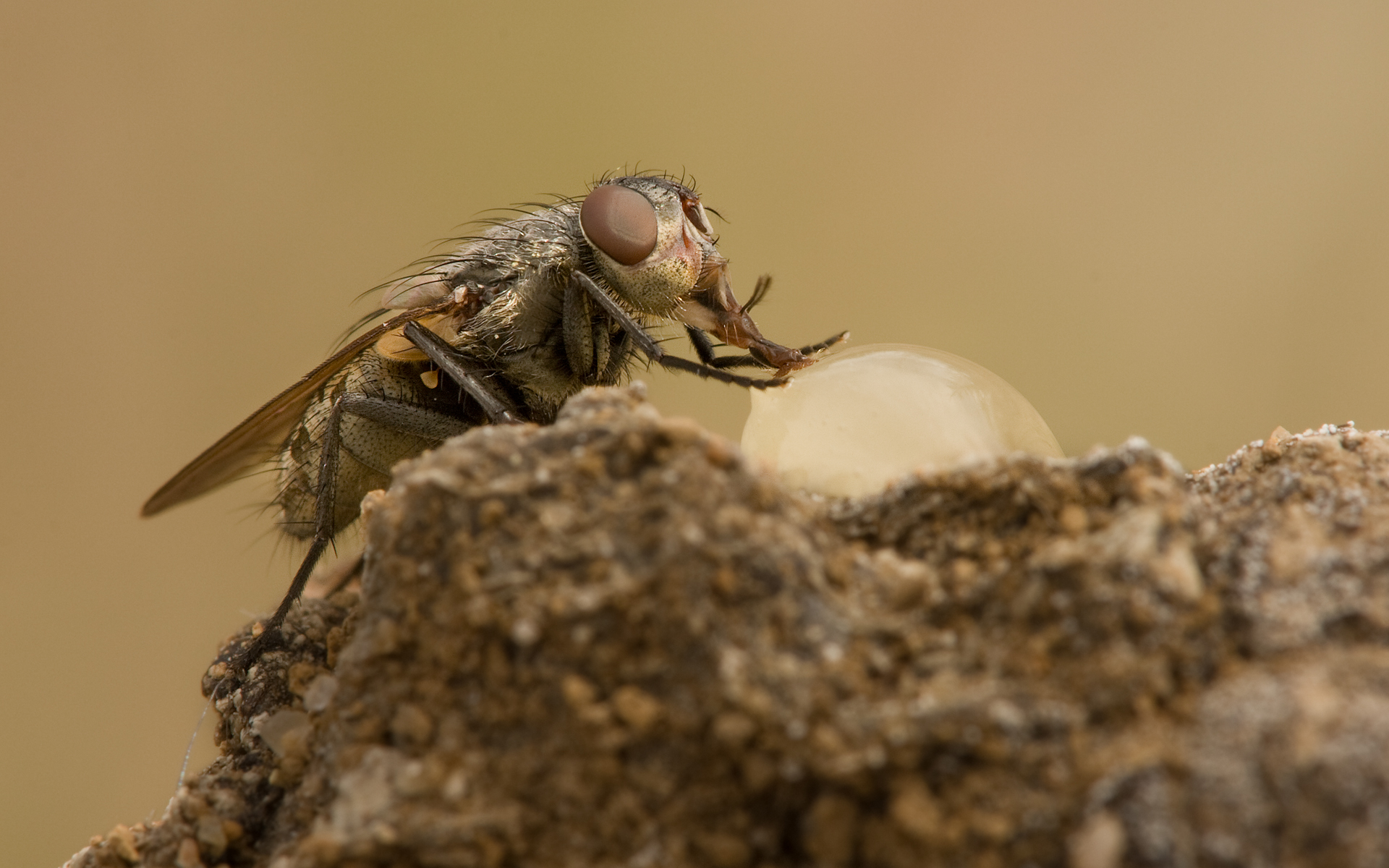 Blow-flies (also frequently spelled blow flies or blowflies), carrion-flies or bottle flies are members of the family Calliphoridae of flies (Diptera). Some members of this family are known as bluebottles, clusterflies or greenbottles. Flies in this family are often metallic in appearance and between 10 to 12 mm in length.

The name blow-fly comes from an older English term for meat that had eggs laid on it, which was said to be fly blown. The first association of the term “blow” with flies was used by in his plays "Loves Labour Lost", "The Tempest", and "Antony and Cleopatra". [ Brundage, Adrienne, “Calliphoridae.” Texas A&M University, College Station. 13-15 Feb. 2008. ]

Calliphoridae adults are known for being shiny with metallic coloring, often with blue, green, or black bodies. Antennae are 3-segmented, aristate. The arista are plumose the entire length, and the second antennal segment is distinctly grooved. Members of Calliphoridae have vein Rs 2-branched, frontal suture present, and well developed s.

The thorax has the continuous dorsal suture across the middle, along with well defined posterior calli. The post-scutellum is absent or weakly developed. The costa is unbroken and the sub-costa is apparent on the insect.

For a pictorial atlas explaining these terms go to [http://www.ento.csiro.au/biology/fly/fly.html#]

Most species of blowflies studied thus far are anautogenous; a female requires a substantial amount of protein to develop mature eggs within her ovaries (about 800 µg per pair of ovaries in ""). The current theory is that females visit carrion both for protein and egg laying, but this remains to be proven.Blow-fly eggs,usually yellowish or white in color, are approximately 1.5 mm x 0.4 mm, and, when laid, look like rice balls. While the female blow-fly typically lays 150-200 eggs per batch, she is usually , laying around 2,000 eggs during the course of her life. The sex ratio of blowfly eggs is usually 50:50, but one interesting exception is currently documented in the literature. Females from two species of the genus "" ("C. rufifacies" and "C. albiceps") are either arrhenogenic (laying only male offspring) or thelygenic (laying only female offspring).

Hatching from an egg to the first larval stage takes about 8 hours to one day. e have three stages of development (called s); each stage is separated by a molting event.The instars are separable by examining the posterior spiracles, or openings to the breathing system [http://www.smlc.asso.fr/smlc/dmla/entomologie/diaporama/images/08.jpg] . The larvae use enzymes in their excreta (as well as mechanical grinding by mouth hooks) to break down proteins on the livestock or corpse they are feeding on. Blowflies are , which is to say that the rate at which they grow and develop is highly dependent on temperature and species. Under room temperature (about 30 degrees Celsius) the black blowfly "Phormia regina" can go from egg to pupa in 150-266 hours (6 to 11 days). When the third stage is complete the pupa will leave the corpse and burrow into the ground, emerging as an adult 7 to 14 days later.

Adult blow-flies are occasional s, being attracted to flowers with a strong resembling rotting , such as the American or Dead Horse Arum. There is little doubt that these flies utilize nectar as a source of carbohydrates to fuel flight, but just how and when this happens is unknown. One study has been done to prove that the visual stimulus a blow-fly receives from its compound eyes is what is responsible for causing its legs to retract from their flight position and allow it to land on any surface. [ Goodman, L.J. (1960). The Landing Responses of Insects. "The Journal of Experimental Biology," retrieved , from http://jeb.biologists.org/cgi/reprint/41/2/403.pdf. ]

Larvae of most species are scavengers of carrion and dung and most likely constitute the majority of the maggots found in such material, although it is not uncommon for them to be found in close associate with other dipterous larvae from the families , , and many other flies.

Worldwide, there are 1100 known species of blowflies, with 228 species in the Neotropics, and a large number of species in and Southern . The most common area to find Calliphoridae species are in the countries of , , , and Southern United States.

The typical habitat for blow-flies are temperate to tropical areas that provide a layer of loose, damp soil and litter where larvae may thrive and pupate.

Blowflies have caught the interest of researchers in a variety of fields, although the large body of literature on calliphorids has been concentrated on solving the problem of in livestock. It is estimated that the sheep blowfly "" causes the Australian sheep industry over $170 million a year in losses.

The most common causes of myiasis in humans and animals are the three dipteran families , Calliphoridae, and . Myiasis in humans is clinically categorized in six ways: dermal and subdermal, facial cavity, wound or traumatic, gastrointestinal, vaginal, and generalized myiasis. If found in humans, the larvae are usually in their first instar. The only treatment necessary is just to remove the maggots, and the patient heals naturally. [ Yazdi , Ismail . "Oral mucosa myiasis caused by Oestrus Ovis." Archives of Iranian Medicine. Academy of Medical Science, I.R. Iran. 17 Apr 2008 ]

The Primary Screwworm ("") once a major pest in southern United States, has been eradicated through massive release of sterilized males. See .

The secondary screwworm ("Cochliomyia macellaria") has become one of the principal species on which to base postmortem interval estimations because its succession and occurrence on decomposing remains has been well defined. The secondary screwworm is found throughout the United States, the American tropics, and in southern Canada during summer months. This species is one of the most common species found on decomposing remains in the southern United States. [ Byrd, Jason H.. "Secondary Screwworms." Featured Creatures Jan 1998 1-2. 28 Mar 2008 ]

MDT or Maggot Therapy is the medical use of selected, tested and disinfected fly larvae, including blow-fly maggots, for cleaning non-healing wounds. "" ("Phaenicia sericata"), or the common green bottle fly, is the preferred species used in . [Monaghan, Peter "Rx:Maggots, Notes from Academe", The Chronicle of Higher Education, (Vol. LIII, No. 39), p. A48.] Medicinal maggots do three things: clean out wounds by eating away the dead, infected tissue, kill off the bacteria, and stimulate wound healing. One problem with this type of therapy is that some species of flies eat healthy tissue as well, including . This type of therapy can be used to treat pressure ulcers, diabetic foot wounds, venous stasis ulcers and post surgical wounds. [ Sherman, R. "Maggot Therapy Project." Maggot Therapy. Sep 2006. 28 Mar 2008 ]

Adults may vector pathogens of diseases such as . Flies, most commonly Calliphoridae, have frequently been associated with disease transmission in humans and animals as well as myiasis. Studies and research have linked "" and "" to vectors of causal agents of bacterial infections. These larvae, commonly seen on decaying bodies, feed on carrion while the adults can be or vegetative. During the process of decay, and/or may be released through the body and may become infected during this process. Flies arrive at the scene and lay their eggs. The larvae begin eating and breaking down the corpse simultaneously ingesting these organisms which is the first step of one transmission route. [ EBSCOhost. 01 Apr 2008 ]

in cattle, pigs and birds ("M. a. avium") have been isolated and recovered from these flies through several different experiments. [EBSCOhost. 04Apr 2008 ]

Other potential vectors and threatening diseases include Rabbit Hemorrhagic Disease Virus [EBSCOhost. 02 Apr 2008 ] in and . Although Strike is not limited to blow flies; these maggots are a major source of this skin invasion causing lesions, and if severe enough, may be lethal. Strike starts when blow-flies lay eggs in a wound or fecal material present on the sheep. When the maggots hatch, they begin feeding on the sheep and thus irritating it. As soon as the first wave of maggots hatch, they attract more blow-flies causing the Strike. Currently, there is no insecticides for blowfly prevention, but precautionary measures may be taken, such as docking tails, shearing, and keeping the sheep overall healthy. [ Peacock, Andrew. "Blowfly in Sheep." New Foundland and Labrador Agriculture 31 Aug 2004 1-2. 15 Apr 2008 ]

has also been proven to be transmitted by the blow fly through saliva, feces and tarsi. Adult flies may be able to spread pathogens via their sponging mouthparts, vomit, intestinal tract, sticky pads of their feet or even their body or leg hairs. [Olsen, Alan R. 1998. "Regulatory Action Criteria for Filth and Other Extraneous Materials*1 III. Review of Flies and Foodborne Enteric Disease." Science Direct Volume 28 (23): 199-211. 01 Apr 2008 ]

As vectors of many diseases, the importance of identifying the transmissible agents, the route and prevention are becoming increasingly important. With the ability to lay hundreds of eggs in a lifetime and the presence of thousands of larvae at a time in such close proximity, the potential for transmission is high especially at ideal temperatures.

Blow-flies are usually the first s to come in contact with because they have the ability to smell death from up to ten miles (16 km) away. Upon reaching the carrion, females deposit eggs onto the body. Since development is highly predictable if the ambient temperature is known, blow-flies are considered a valuable tool in . Traditional estimations of time since death (namely and ) are generally unreliable after 72 hours and often entomologists are the only officials capable of generating an accurate approximate time interval. The specialized discipline related to this practice is known as [http://www.key-net.net/users/swb/forensics/BF.htm.]