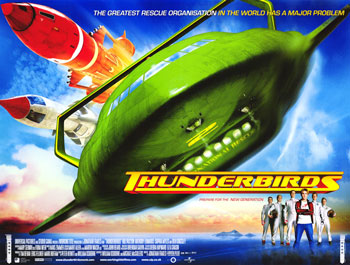 "Thunderbirds" is a 2004 - based upon the television series of the same name of the 1960s, directed by . The movie, written by William Osborne and , was released on , in the UK, with later dates for others. The film uses live-action actors playing the Tracy brothers rather than the used in the television series. The film did fairly poorly at the box-office and critical response was mainly negative. The film's soundtrack features songs by British band , including the single "Thunderbirds" which reached number one in the UK charts.

The year is 2020 (according to an on screen caption). Teenager (), sent off to a distant , is the youngest of the sons of , a retired American (). Jeff, a widower, has formed International Rescue, and raised his sons to act as a secret, volunteer organization which uses highly advanced technology to save lives worldwide. Jeff and his older sons (John, Virgil, Scott, and Gordon, who like Alan were named after the astronauts) are joined in this effort by Lady Penelope and her / Parker (a man whose "checkered past" comes in handy). Their futuristic hardware is largely developed by a genius scientist known as Brains (), who lives at the International Rescue base on Tracy Island, somewhere in the .

Alan is eager to join his family in their work, but his big brothers still see him as just their little kid brother; not ready for duty. Alan is befriended by Brains' son Fermat (Soren Fulton) and has a budding romance with Tintin (), adolescent daughter of Tracy Island's caretaker, Kyrano (Bhasker Patel), and the cook, Onaha.

portrays the known as The Hood, a character introduced in the first episode of the television series, brother of Kyrano. Bitter over having been abandoned and presumed dead by the "Thunderbirds" in an early rescue attempt, he has come to destroy them and take their machines to use in a daring raid on the (renamed "Bank of London", for the film) vaults. He launches a missile to wreck "Thunderbird 5," the orbiting communications station. The Tracys except, of course, for Alan - launch into aboard "Thunderbird 3" to rescue John Tracy, who is manning the station when it is hit, and The Hood takes over the secret island base.

Using his mental powers to overcome Brains' resistance, The Hood takes control of the Thunderbirds home base, aided by his counterpart Transom () and strongman Mullion (Deobia Oparei). He also disables the control systems, stranding the rescuers aboard the disintegrating "Thunderbird 5". Alan, Tintin and Fermat, having observed the invasion of the Hood and his minions, then hearing his plans, launch a hasty resistance. Fermat disables heavy-lifter "Thunderbird 2" as they retreat from the base, then flee to the mountaintop site. They make contact with Jeff Tracy, who tells them to wait for Lady Penelope to come and take charge. However, the impulsive Alan leads the other two teenagers into ill-planned action, resulting in their capture. Lady Penelope and Parker are likewise captured, and Alan is forced to give "Thunderbird 2"'s missing guidance processor to the Hood. The island's defenders all end up locked in the walk-in while The Hood, Transom and Mullion head off to .

Escaping the freezer, the first order of business is to rescue "Thunderbird 5" and the Tracys. Reporting The Hood's scheme, Alan gets his chance to go to work. He, Fermat and Tintin launch for London in "Thunderbird 1", chaperoned by Lady Penelope.

The Hood and his accomplices, having arrived in London, use International Rescue's drilling machine "The Mole" to begin tunneling toward the vaults at the Bank, in the process damaging the support for a public-transit , which falls into the . The pursuing Alan, Tintin and Fermat land next to "Thunderbird 2," then begin their rescue of the submerged monorail and its passengers. Alan turns over piloting duties to Fermat, then launches in the "Thunderbird 4" rescue . When Alan and Fermat are unable to connect the lifting cable, Tintin dives into the water, swims down to the stricken monorail where she secures the cable, then joins Alan aboard "Thunderbird 4". Jeff and his other sons arrive just in time to see the successful rescue, then Jeff, Alan, Tintin and Fermat rush to the bank, where they are joined by Parker.

Lady Penelope has been captured, and Jeff is soon imprisoned with her. Fermat and Parker keep Mullion at bay, while Tintin evades (then traps) Transom. She arrives on the scene just in time to see The Hood - her uncle - wiping the floor with Alan. She then proves that she has mental powers similar to her uncle's and actually overpowers him in the resulting duel, which results in the evil Hood falling into mortal danger.

The Hood is soon rescued from the deadly predicament in which he is trapped by the newly-arrived other members of International Rescue, who then overpower him. With the evil-doers turned over to , the Tracys return home, where the three young heroes are inducted into International Rescue.

This is the second film with and , the other being "Thirteen".

The movie is essentially a adventure aimed at the very young, but with a great number of "in jokes" and references for the older generation which grew up with the original series, including visible strings on a character's hand in one scene and the Hood's mind powers causing Brains to walk like his original puppet counterpart.

By August , the film had taken a relatively low worldwide total of about $28m (£14m). It cost $57m (£29m) to produce. The film received a poor critical response and was the subject of vociferous complaints from longtime fans.weal Those familiar with the series tended to be more negative in their views, accusing the filmmakers of abandoning the concepts of the original series in favor of the "" angle, with reviewers dubbing it "Thunderbirds Are NO!"Views needing attribution|date=August 2007 (a riff on the catchprase from the original series, "Thunderbirds are GO!").

Fans of the original series directed heavy criticism at the film through the even before its release.

One of the few aspects of the film to receive positive acclaim (other than the special effects) was ' performance as iconic superspy Lady Penelope, a portrayal in a style identical to that of her television counterpart. The "Thunderbirds" craft, as well as Tracy Island, were also seen to be very close to the style of the original designs. Purists disliked the fact that "FAB-1," Lady Penelope's car, was a Ford rather than a Rolls-Royce. However, this was because the producers could not reach a suitable agreement with Rolls-Royce; the car manufacturers insisting that only an actual production model could be used. Ford stepped in with special version of their Thunderbird model, duplicating the six-wheel system on the Supermarionation Rolls. "FAB-1" steers with the four front tires.

The supplied a number of vehicles to the production, including an advanced which prominently sported the as well as many and s in various locations, leading to jeers over the too-obvious level of by the car manufacturers - a sentiment actually shared by director Jonathan Frakes, as revealed in the DVD audio commentary.

During development, was invited to act as , but was left out when the studio felt there was enough employees on the payroll acting as part of the creative team. The studio offered him $150,000 (£86,000) to attend the premiere but Anderson could not accept money from people he had not worked for. He eventually saw the film on DVD and declared "It was disgraceful that such a huge amount of money was spent with people who had no idea what "Thunderbirds" was about and what made it tick." [cite news|author=Talking Shop: Gerry Anderson|work=|date=2008-10-07|url=http://news.bbc.co.uk/1/hi/entertainment/7655589.stm|accessdate=2008-10-07]

Differences with the original

There are notable changes from the original. The most obvious difference is the updated effects and new designs of the "Thunderbirds". Most of them are now sleeker and look more modern; however, most of them are still based on their original designs, with "Thunderbirds 2" & "4" deviating the most from their original designs. Tracy Island had a major overhaul and FAB-1 changed from a Rolls Royce to a Ford. The organisation is also referred to as Thunderbirds instead of International Rescue; although on their induction at the end of the film Alan, Tin-Tin and Fermat receive badges that are designed with the "IR", International Rescue, logo on them as per the original TV series intimating that the team are still officially called this, even though it seems the media's common parlance of "Thunderbirds" has become the norm, and been adopted amongst the family members themselves for everyday use.

Also the plot was changed dramatically by making the younger Tin-Tin, Alan Tracy and Fermat Hackenbacker, who is depicted as being Brains' son, the main characters. In the original however Alan Tracy does tend to sometimes have a larger role than the others and certainly a more emotional storyline (especially in the "Thunderbirds Are Go!" movie), but he's never been the main character. Alan and Tin-Tin were in fact much closer to the age of the rest of the Tracy brothers, in fact Alan is captain of "Thunderbird 3" from the very first episode. Fermat Hackenbacker was only seen in this movie, because there's no mention of Brains ever having a son. Also in the original, Jeff Tracy never flew any of the "Thunderbirds" craft and there has never been an instance where he went off to the danger zone (with the exception of the episode "Brink of Disaster" because he was caught in the accident).

Like Fermat, the character of Onaha is not from the original TV series, where Kyrano was a single parent &ndash; and presumably, like Jeff Tracy, a widower. In addition, the TV series has "Kyrano" as the family name, with Kyrano's first name never being revealed. Jeff's mother (known simply as Grandma in the TV series) does not feature or get mentioned during the film.

Other changes are more canonical. The feature film is set in 2020, while the original is set in 2026, the year of International Rescue's first mission according to a calendar seen in the episode 'Give or Take a Million' (although according to Fanderson this was a mistake and it should have read 2065 ie 100 years in the future). In the feature film, the Hood said that he was left for dead in one of International Rescue's earlier missions, but in "Trapped in the Sky" -- which was stated as International Rescue's first mission -- he was already trying to get their technology, which he knew the existence of via Kyrano.

Another notable difference between the 2004 film and the original TV series is that International Rescue now allows itself to be filmed and photographed on missions. One of the recurring 'rules' in the original TV series was that under no circumstances was anything related to International Rescue -- be it the pilots or the crafts themselves -- permitted to be photographed. In the episode "Terror in New York City", Scott Tracy wipes the film of a news crew with EMP when they breached this rule.

The location for Tracy Island was filmed on North Island, a boutique island resort in the , although originally said to be somewhere in the south Pacific, presumably , or .

This was in fact the third theatrical release based upon the series created by Gerry and . It was preceded by "" in and "" in , both films using the Supermarionation production techniques of the series. Gerry Anderson had no involvement in the making of this film as his ex-wife Sylvia owns the film rights to the characters.Fact|date=February 2007

"Thunderbirds" was dedicated to the memory of Stephen Lowden.

Timed to coincide with the theatrical release of "Thunderbirds", the two prior films were released on DVD. The DVD versions of all three films include a number of extra features, including historical and production information.