The film is a slice-of-life style autobiography of sorts, depicting Herman Raucher's (Gary Grimes) first year in college, where he falls in love with Julie (Deborah Winters) under the shadow of the growing threat of WW II. Jerry Houser and Oliver Conant reprise their roles as the other two members of Raucher's circle of friends, "The Terrible Trio," Oscar "Oscy" Seltzer and Benjie, although the latter only appears in the film for a matter of minutes.

The film received moderate and poor reviews upon its release. It did not fare very well at the box office, mostly attributed to the film's breaking the "arty" format of the first film for a more standard approach, and the omission of any mention of the first film. The movie slipped into obscurity, and although Summer of '42 has been on DVD for several years, where it has been a relative commercial success, Warner Brothers released "Class of '44" on made-to-order DVD in 2010.

The film is also noted for being the feature film debut of John Candy in a very brief appearance at the beginning.

The film opens with Hermie's, Oscy's and Benjie's high school commencement exercises. During the ensuing party at Hermie's house, the three agree to meet at a diner that night, at which point Benjie announces he has enlisted in the marines and will report for basic training the following day. Hermie and Oscy are going to college at their respective fathers' request and spend the summer working at a loading dock. A few months later, Benjie pays a surprise visit before reporting to active duty in the South Pacific. He can't stay for lunch, saying he's on his way to the subway, so Hermie and Oscy accompany him to the station, where they say their goodbyes.

Shortly thereafter, Hermie and Oscy are off to college, where they settle in their boarding house and are introduced to campus life. When Hermie goes to apply for a position at the campus newspaper, he meets Julie, an attractive, well-to-do coed. They strike up a friendship and quickly fall in love. Oscy meanwhile laments that he won't last very long in college, saying he's doing it for his father, and expends more effort in trying to pick up girls than studying. He tries out for football and makes the team. The two of them join a fraternity that Julie has picked out, and go through the ritual of initiation. No sooner do they move into the frat house when Oscy gets expelled from school for having a girl in his room - a major rule violation. When Hermie expresses concern about upcoming exams, Julie teaches him a few tricks on cheating. 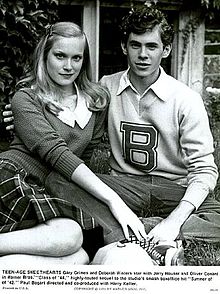 Hermie and Julie have a falling out when Julie informs him that they can't go to the fall dance together because an old boyfriend was going to be in town and insisted on seeing her that same evening. Julie tries to assure Hermie that this fellow means nothing to her anymore and has no objection if Hermie were to go to the dance with someone else, but Hermie doesn't buy that and Julie leaves in a huff. Back at the frat house, Hermie gets into an argument with his new roommate over personal hygiene. It escalates into a shouting match when a phone call brings bad news for Hermie: his father has died suddenly. He returns home for the funeral, where Oscy pays his respects after the service. He is now in the army and is stationed on Governor's Island as a clerk typist. Oscy tries to lift Hermie's sagging spirits by suggesting they go out and have a drink in memory of Hermie's father. Once at the bar, they become inebriated and a brawl breaks out. They manage to escape and eventually stagger back to Hermie's house, where Hermie struggles to accept the fact that his father is gone.

Hermie returns to college and is about to call for a cab at the New York, New Haven and Hartford Railroad train station when headlights are aimed directly at him, then a car horn is sounded. It's Julie, who has come to meet him. She tells Hermie that she found out about his father and called his house, at which point Hermie's mother told her what train he'd be on. She offers her condolences and informs Hermie that he passed his exams. The two reconcile as the film ends.

The subway scenes were filmed on location in Brooklyn, New York. A vintage 1920s BMT Triplex train was used and the interior of the 15th Avenue entrance to the New Utrecht Avenue station on the Sea Beach (today's N) line was restored to its 1940s appearance. The train itself operated on the West End (today's D) line and is seen pulling into the 62nd Street station.

The scene at the diner was filmed in Toronto for the purpose of depicting PCC-type streetcars that ran in Brooklyn during the time period the movie is set in. However, the streetcars seen in the movie are postwar models characterized by the presence of standee windows, something that prewar PCCs such as the ones that operated in Brooklyn did not have. They also have the maroon and cream paint scheme used in Toronto while Brooklyn's PCCs were predominantly tan.