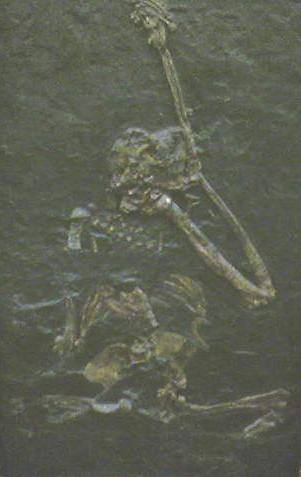 The Swamp Ape ("Oreopithecus bambolii") is a prehistoric from the epoch whose s have been found in ( and ) and in . To date, over 50 individuals have been discovered from the Tuscan mines of Monte Bamboli, Baccinello, Montemassi, Casteani, and Ribolla, making "Oreopithecus" one of the best-represented fossil s.

The scientific name "Oreopithecus" quickly inspired the commonly used though unofficial name for the species among paleontologists, . The true etymology, however, is rather more mundane: it comes from the Greek "oros" and "pithekos" meaning "hill-ape".

"Oreopithecus bambolii" evolved in isolation from other animals for at least two million years on an island in the where in is found today. A cooling phase around 9 million years ago transformed a tropical island into a temperate one characteristic of middle European biomes at the time. There were no large predators on the island and the apes didn't have any natural enemies. Later, probably during the ice age when the sea level dropped all over the world, a land bridge emerged and connected the island with the mainland. New species, among them large predators, were then free to invade this isolated environment where animals like the Swamp Ape were easy prey. Soon this strange primate, as well as other creatures on the island, was gone forever; a parallel to what happened when the land bridge between North America and South America joined the two continents.

Allometric measurements on the bony labyrinth of BAC-208, a fragmentary cranium that preserves a complete, undeformed petrosal bone suggest that "Oreopithecus" moved with agility comparable to extant great apes. Its anterior and lateral semicircular canal sizes fall within the range for great apes. Its relatively large posterior arc implies that "Oreopithecus" was more proficient at stabilizing angular head motion along the sagittal plane.

Some have suggested the unique locomotory behavior of "Oreopithecus" requires a revision of the current consensus on the timing of bipedality in human developmental history, but there is little agreement on this point among s. Among other things, its foot was birdlike and had an anatomy different from the early bipedal human ancestors. The big toe of its unique foot splayed out 90 degrees from the other toes, all of which were shorter and straighter than those of modern apes. The foot's birdlike, tripod design probably was associated with a short, shuffling stride. Some researchers have related "Oreopithecus" to the early Oligocene "", a small arboreal proto-ape that lived nearly 34 million years ago in Egypt. Others claim it is an extinct great ape without descendants and a sister taxon of the European "", a Miocene genus that resembles modern great apes. Still others have suggested that "Oreopithecus" is an arboreal hoofed mammal. For the moment, this species is a considerable anomaly, and may represent an independent development of bipedality other than that which led to humans, and which came to a dead end some time later. More fossil discoveries may help settle this and other questions. Likewise, the taxonomic placement of "Oreopithecus" is unsettled. Some scientists place it as a very early , shortly after the split from the s. Other scientists place it in just before the split of the s from the rest of the s.

"Oreopithecus bambolii" is estimated to have weighed 30–35 kg. It possessed a relatively short snout, elevated nasal bones, small and globular , vertical , and facial bones. The shearing crests on its molars suggest a diet specializing in plant leaves. The very robust lower face, with a large attachment surface for the and a for attachment of the , indicates a heavy . Its teeth were small relative to body size. The lack of a diastema (gap) between the second and first of the indicates that "Oreopithecus" had canines of size comparable to the rest of its dentition. In many primates, small canines correlate with reduced inter-male competition for access to mates and less .

Its habitat appears to have been y, and not or . The postcranial anatomy of "Oreopithecus" features adaptations to both suspensory arborealism and bipedalism. Functional traits related to suspensory locomotion include its broad thorax, short trunk, high intermembral index, long and slender digits, and extensive mobility in virtually all joints. At the same time, it also features adaptations to upright walking such as the presence of a curve, in distinction to otherwise similar species known from the same period. Since the fossils have been dated to about 8 , this represents an unusually early appearance of upright posture. How adapted it was for bipedal walking is not known, but its fingers and arms also seems to show adaptations for climbing and swinging.

Another piece of evidence lies in the s of the inner ear. The semicircular canal serves as a sense organ for balance and controls the reflex for gaze stabilization. The inner ear has three canals on each side of the head, and each of the six canals encloses a membranous duct that forms an -filled circuit. Hair cells in the duct’s pick up endolymph disturbances caused by movement, which register as rotatory head movement. They respond to body sway of frequencies greater than 0.1 Hz and trigger the vestibulocollic (neck) reflex and vestibuloocular (eye) reflex to recover balance and gaze stability. The bony semicircular canals allow estimates of duct arc length and orientation with respect to the sagittal plane.

During upright walking, human head rotation frequencies range between 2–8 Hz along the sagittal and s and between 1–3 Hz along the horizontal plane. Across species, the semicircular canals of agile animals have larger arcs than those of slower ones. For example, the rapid leaper "" has semicircular canals much bigger than the slow-climbing "". The semicircular canals of brachiating s are bigger than those of arboreal and terrestrial quadrupedal s. As a rule of thumb, arc size of the ducts decreases with body mass and consequently slower angular head motions. Arc size increases with greater agility and thus more rapid head motions. Modern s have bigger arcs on their anterior and posterior canals, which reflect greater angular motion along the sagittal plane. The lateral canal has a smaller arc size, corresponding to reduced head movement from side to side.