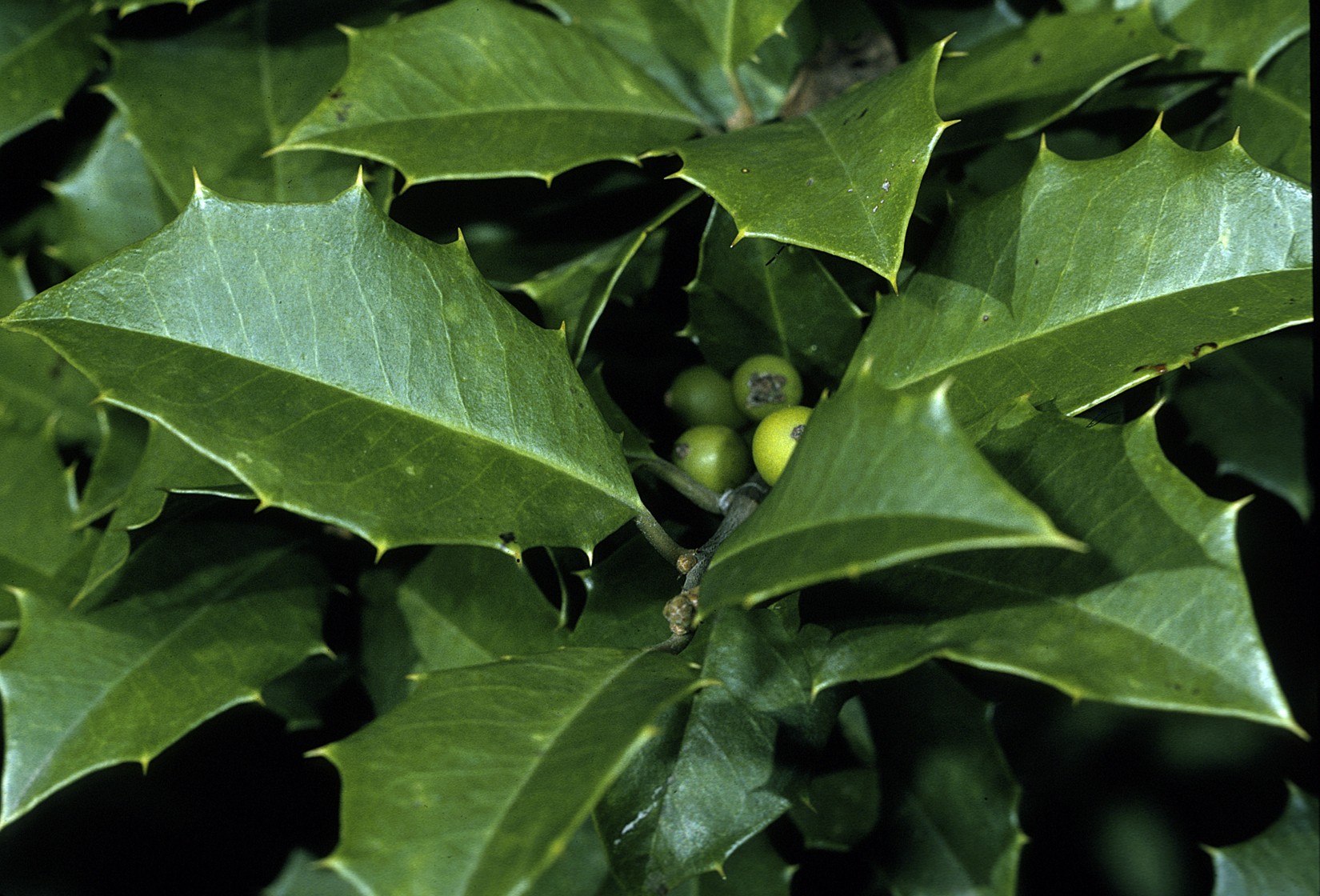 "Ilex opaca" (American Holly) is a species of , native to the eastern , from coastal south to central , and west to southeastern and eastern .

It is a medium-sized broadleaved tree growing to 10–20 m tall, exceptionally up to 30 m tall, with a trunk diameter typically up to 50 cm, exceptionally 120 cm. The is light gray, roughened by small warty lumps. The branchlets are stout, green at first and covered with rusty down, later smooth and brown. The winter buds are brown, short, obtuse or acute. The leaves are alternate, 5–7.5 cm long and 2–4 cm broad, stiff, yellow green and dull matte to sub-shiny above (distinctly less glossy than the otherwise fairly similar European Holly ""

The s are greenish white, small, borne in late spring in short pedunculate cymes from the axils of young leaves or scattered along the base of young branches. The calyx is small, four-lobed, imbricate in the bud, acute, margins ciliate, persistent. The corolla is white, with four petal-like lobes united at the base, obtuse, spreading, hypogynous, imbricate in bud. The flower stem is hairy with a minute bract at base. Like all hollies, it is dioecious, with separate male and female plants; only female plants produce the characteristic red berries. One male can pollenize several females. Male flowers have four stamens, inserted on the base of the corolla, alternate with its lobes; filaments awl-shaped, exserted in the sterile, much shorter in the sterile flower; anthers attached at the back, oblong, introrse, two-celled, cells opening longitudinally. The pistil on female flowers has a superior ovary, four-celled, rudimentary in staminate flowers; style wanting, stigma sessile, four-lobed; ovules one or two in each cell. The is a small red 6–12 mm diameter containing four s; it is often persistent into winter.

The species typically grows as an tree in forests. It is rare in the north of its range in New England and New York, and always small there. It is abundant further south on the southern coast and in the Gulf states, reaching its greatest size on the bottomlands of southern Arkansas and eastern Texas. The branches are short and slender. The s are thick and fleshy. It will grow in both dry and swampy soil, but grows slowly.

The flowers are pollinated by insects, including s, s, s, and night-flying s. The berries are reputedly ous to humans, but are important survival food for s, who will eat the berries after other food sources are exhausted. The tree also forms a thick canopy which offers protection for birds from s and storms. s including thrushes, s, catbirds, s and s frequently feed on the berries.

The is very pale, tough, close-grained, takes a good polish, and is used for whip-handles, engraving blocks, and cabinet work. It can also be dyed and used as a substitute for ebony. It has a density 0.58 to 0.64. The sap is watery, and contains a bitter substance which possesses tonic properties.

It is often planted as an , although a slow growing one. Over 1,000 s have been selected, including plants selected for cold tolerance ('Cobalt', a male cultivar, is able to tolerate temperatures as low as −32 °C), growth form (e.g. dwarf forms such as 'Cardinal Hedge', a female plant growing to 1.2 m tall), and color and abundance of fruit (notable female cultivars including the large-berried 'Yule', and the yellow-berried 'Canary' and 'Morgan Gold').

Holly is a popular decoration. In English poetry and English stories the Holly is inseparably connected with the merry-making and greetings which gather around the Christmas time. The custom is followed in North America, and holly and are widely used for decoration of homes and churches. The European Holly does not grow in the climate of most of the United States, but the American Holly makes an excellent second choice for it closely resembles the European species. The leaves are similar in outline and toothed and bristled very much the same way, but they are a pale green, although the surface gloss is much duller than in the European species.

The American holly is the state tree of .