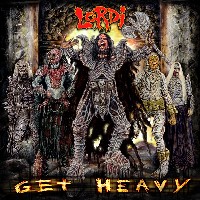 
Get Heavy is the 2002 debut album by .Despite the fact that the bassist appears on the front cover, all bass guitars were played by the former bassist Magnum, who left after the recording and before the release of the album. The album is dedicated to Magnum.

The German and Japanese versions also include the "" video. The album was released on May 13th 2008 in North America.

#Would You Love a Monsterman?
#Devil is a Loser