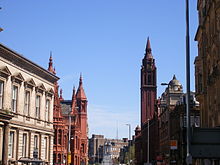 Looking down Corporation Street at the courts

Buses stopping on Corporation Street as viewed from the junction with New Street.

The façades of the buildings fronting Corporation Street. 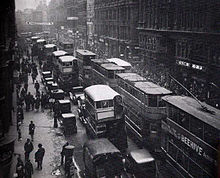 Corporation Street is a main shopping street in Birmingham city centre, England. It runs from the law courts at its northern end to the centre of New Street at its southern.

The creation of the street

The creation of Corporation Street was enabled by the Artisan's and Labourers' Dwellings Improvement Act 1875, demolishing an area of slums - the first use of the Act in England. The concept of a "Parisian boulevard" was vigorously promoted by Joseph Chamberlain when he was mayor. It would have led straight to New Street Station at the time. The upper part of the street incorporated Lower Litchfield Street. The street was the centrepiece of a grander scheme which also had a street cut to Colmore Row and another street to Dale End (then Martineau Street). However, the costs of such a project resulted in the abandonment of the plan for the street to Colmore Row and the street to Dale End was delayed until 1886.

The scheme covered 93 acres, the Corporation buying the freehold of some 45 acres (180,000 m2), at a cost of £1,300,000. Six hundred buildings were purchased and demolished for the work. The work was largely given to Martin & Chamberlain, and demolition began in August 1878, but after architect John Henry Chamberlain's death the contract for the Law Courts went to London architect Aston Webb. Sites were let to builders on a 75 year lease which expired in the 1960s, a time of much architectural destruction in Birmingham, so many buildings have been lost. The bombing during World War II also caused much destruction at the New Street railway station end of the road.

The first lease of land in January 1878 was a for a women's hospital in the Priory which would later include the Grand Theatre, Cobden's Hotel and the Winter Gardens. 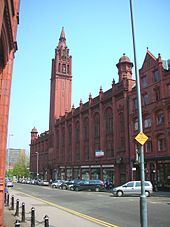 It has several important Victorian listed buildings on it including the red brick and terracotta Victoria Law Courts, Methodist Central Hall, and the seven buildings nearest New Street. The County Court, at the junction with Newton Street, is Grade II listed. Built in 1882 to a design by James Williamson, the building is a late example of an Italian palazzo.

The New Theatre, opened in November 1883, was located next to Old Central Hall (renamed to King's Hall) in Old Square. Both buildings witnessed numerous conversions and the New Theatre was renamed the Grand. The Grand was renamed "The Grand Casino Ballroom" before its demolition in 1960 for the construction of The Priory Queensway.

The Minories Building, formerly Lewis's Department Store, was built above a road way, which still exists, also called The Minories. The road separated the buildings with Berlin House located to the east of it and was incorporated into the Corporation Street development as it was part of the slums. The Minories is now home to numerous small shops and the ground floor fronting Corporation Street is owned by The Square Peg, a popular bar.

Future developments on Corporation Street include Martineau Galleries to replace Priory Square opposite The Minories. Priory Square is a two storey shopping precinct of concrete Brutalist architecture. It was designed by Sir Frederick Gibberd and was opened in 1966 as Corporation Square. The Martineau Galleries scheme will see the relocation of the Oasis Market which is accessed from an entrance on the street.

Access to Corporation Street is now limited to buses and taxis; it acts as a terminus for many of the city's bus services.

C&A and Beatties former store in Birmingham, is now a shopping centre with three stores; New Look, Mothercare and JJB Sports. The former department store site has undergone a £5 million facelift. The Beatties store opened in Birmingham in 2001 but never managed to make a profit so closed down in 2006.

The address 126B Corporation Street, is referred to in the Sherlock Holmes story The Adventure of the Stockbroker's Clerk as the temporary headquarters of the Franco-Midland Hardware Company.