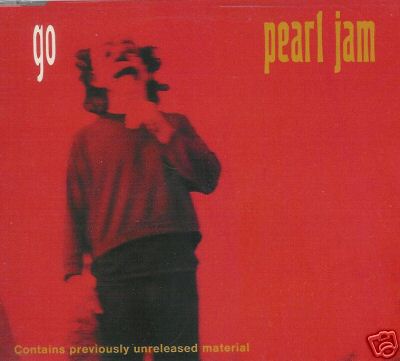 "Go" was one of the songs the band produced during the first week of recording for "Vs."

That solo on "Go" was probably the second of three or four takes. And I do have a problem recreating it live, because I wasn't thinking about it at all when we did it in the studio. So on stage, I get into this mode where I'll start to think while I'm playing, "Okay, this sounds like the album, and I want to emulate that." But to really capture that feel of being in the moment, I have to be in contact with the emotion that's running through me RIGHT NOW.

In Kim Neely's book "Five Against One: The Pearl Jam Story", Abbruzzese quips that frontman Eddie Vedder told him he wrote the song about his pickup truck. [Neely, Kim. "Five Against One". Diane Publishing Company, 1999. ISBN 0-7567-7409-8] This may be a clever joke on the chorus of the song "Please don't go on me", but the full lyrics of the song suggest it is of a much more serious nature.

It was released as a single with a B-side titled "Alone", which can also be found on the compilation "Lost Dogs" (2003). The song peaked at number three on the "Billboard" Mainstream Rock Tracks chart and number eight on the "Billboard" Modern Rock Tracks chart. The song was nominated for the for Best Hard Rock Performance in 1995. [cite web
url = http://www.rockonthenet.com/archive/1995/grammys.htm
title = 37th Grammy Awards
publisher = Rockonthenet
accessdate = 2007-09-05]

Outside of the United States, the single was released in , , , the , and the . The UK release of this single featured a free cassette with the "Vs." track "Animal" being played live, which was distributed free with all the vinyl "Go" singles. This made the song ineligible for the UK top 40 chart. It is unknown how many sales the single generated, but as this was the case Pearl Jam essentially missed out on breaking into the UK's top ten single sales with this release ("" eventually reached number 10 in November 1994, the band's only UK top 10 single). "Go" peaked at number 33 on the Australian Singles Chart, reached the top 30 in the Netherlands, and was a top ten success in . It was a moderate top 20 success in .

Chris True of said that "Go" "can at times feel like a jam, but a jam that has stripped all the useless meanderings and solos in favor of sheer pace." He added, "For them to open up their second album, "Vs." with this rather aggressive song...was an obvious statement by Pearl Jam that they were no longer the band of 'Jeremy' fame. This was a band intent on writing its own rule book, taking over their way." [True, Chris. [http://allmusic.com/cg/amg.dll?p=amg&sql=33:21jle8u34xg7 "Go > Review"] . . Retrieved on May 16, 2008.]

A montage of highlights set to "Go" can be found on the "NBA Superstars 3" home video release. The song is featured on the soundtrack for the 2004 film "".

The song was premiered live at the band's May 13, 1993 concert in San Francisco, . [ [http://pearljam.com/songs/song.php?song=Go "Pearl Jam Songs: "Go""] . pearljam.com.] On April 3, 1994, Vedder dedicated a live version of the song to shortly after the former Nirvana frontman had nearly died as a result of overdosing on alcohol and Rohypnol while on tour in Rome in March 1994. (Cobain's body was not found following his successful suicide attempt until 5 days later, on April 8. Cobain is believed to have died on April 5).

Live performances of "Go" can be found on the "Dissident"/"Live in Atlanta" box set and on the live albums "" and "". A performance of the song is also included on the DVD "".