Cuadrilla is a Spanish word for a small group of people.

Specifically it can mean: 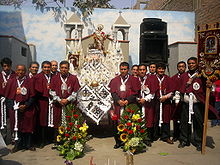